Balantidium coli is a ubiquitous protozoan of the class Ciliata which inhabits the lumen of the large intestine of many pigs, but may also be found in other species of animals, including guinea pigs, dogs, rats, non-human primates7 and birds, as well as in humans. It is a commensal, but under certain circumstances, may apparently act as an opportunistic pathogen.

The vegetative form, or trophozoite of B. coli is a relatively large, motile, oval to ellipsoidal organism varying in size from 30 to 150 μm in length and 25 to 120 μm in width. Its surface is entirely covered with cilia arranged in slightly oblique rows, and internally within the endoplasm are two nuclei, a large kidney-shaped macronucleus and a much smaller, spherical micronucleus which lies in the notch of the macronucleus.9 The nuclei are readily identifiable and their presence assists in confirming the identity of the parasite. 2 The parasite also contains one contractile vacuole and several food vacuoles. Reproduction is generally by transverse binary fission, but conjugation may also take place.9

Cysts are produced. These are ovoid to spherical and measure 45 to 65 μm in diameter. The peroxisomes of the trophozoites of B. coli found in subclinical cases are smaller than those isolated from pigs with acute balantidiosis.8 The organism can be recognized within the cyst by the macronucleus. 9

Both cysts and trophozoites are passed to the external environment in the faeces. Generally, transmission is by ingestion of cysts which may remain viable for days or weeks in moist pig faeces, but trophozoites may also play a role in this respect.9 Trophozoites, however, are much less resistant than the cysts.9 The faeces of sows are the major source of infection for piglets.5

No reports of clinical disease caused by B. coli have been recorded in South Africa,10 but the organism has been the subject of incidental identification in histological sections of the colon of pigs.4, 10

Under normal circumstances, B. coli lives in the intestinal contents and on the mucosa of the large intestine, and does not appear to have any deleterious effect upon the host. On occasion, it may invade the intestinal mucosa when this becomes damaged by, for example, a primary pathogen (Figure 21.1). In some animals B. coli will penetrate to the submucosa or even as deep as the muscular layer.1 The organism produces hyalonuridase which facilitates its penetration into tissues.11 The response to the tissue invasion is inflammation of the part concerned, with the development of superficial and deep ulceration. Clinical manifestations in such affected animals are those associated with mild to severe, even fatal, enteritis.1 The faeces may be bloodstained. In piglets, anaemia, enteritis and decreased growth rate have been reported.5

Infection of humans is usually acquired by the contamination of the hands or food with pig faeces.9 In some humans harbouring the parasite, there is severe diarrhoea or dysentery. Ulceration of the large intestine may develop, which can be complicated in some cases by haemorrhage,6 perforation of the gut wall and peritonitis.2 The ulcers are similar to those of amoebic dysentery.2 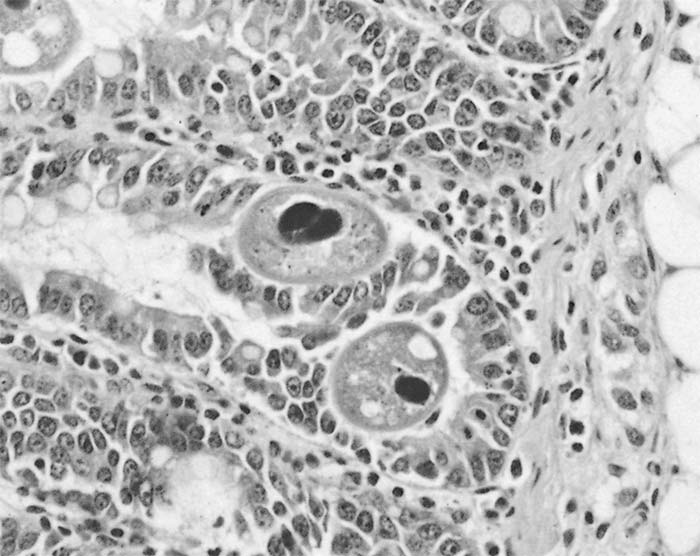 Figure 21.1  Balantidiosis in a pig: Balantidium coli parasites in the mucosa of the colon

The diagnosis of frank disease caused by B. coli infection is based on the clinical signs, lesions and presence of large numbers of organisms in affected areas. Before making a definitive diagnosis of balantidiosis, however, the pathogenesis of the disease process must be borne in mind; the fact that the parasite is present does not necessarily indicate that it is the primary cause of the condition unless additional evidence can be provided.9

Tetracyclines have been used both for the treatment of clinically affected animals and for the prophylactic treatment of pigs so as to prevent transmission to humans. The addition of 100 g oxytetracycline per tonne of pig feed appears to be efficient in clearing the faeces of B. coli cysts.5 Metronidazole at 30 mg/kg twice a day for five days administered per os can be used for treatment of dogs, cats8 and humans.