P A COLLY AND A L LANGE

Bolo disease is a localized, mild, subacute to chronic, superficial dermatitis of woolled sheep and is caused by an unclassified Corynebacterium sp.2 Clinically it is characterized by dark grey to blackish discoloration of the fleece overlying affected areas of the skin.

The condition was first reported in sheep in 1974 on the farm ‘Bolo’ in the Eastern Cape Province of South Africa. It is now widely distributed throughout the Cathcart and Stutterheim districts, where it has been diagnosed on approximately 8 per cent of the farms. Isolated cases have also been reported from the East Griqualand district and elsewhere in KwaZulu-Natal, but the exact distribution of the disease in southern Africa is unknown.3

Bolo disease is of considerable economic importance to wool farmers who own flocks in which it occurs. Economic losses in affected flocks occur because many of the fleeces are down-graded, labour costs increase because of the timeconsuming plucking of affected wool from the shorn fleeces, and chronically affected sheep are ‘poor doers’ and show a loss in production.1

Much investigation and research remains to be done on this disease, and the information contained in this chapter is based largely on personal observations and unpublished data. 2, 3–6

Initial field investigation of the condition yielded a number of different bacterial species from affected animals, but the as yet unclassified Corynebacterium sp. is believed to be the causative organism. In a further survey involving 15 farms and 750 sheep, from which 1 168 samples were taken for bacterial isolation, the bacterium was isolated from 94 per cent of severely affected sheep, 83,7 per cent of mildly affected sheep, and only 1,36 per cent of apparently unaffected sheep.6 No evidence could be found of arthropod, helminth or fungal involvement.2 The application of cultures of this organism in normal saline to the skin of sheep led to a condition which resembled Bolo disease both clinically and histopathologically.2, 5

The unclassified Corynebacterium sp. is a Gram-positive, non-acid fast, pleomorphic, beaded, unbranched rod which does not undergo a rod/coccus cycle. It is a facultative anaerobe, is catalase-positive and oxidase-negative. Unpigmented, pinpoint-sized colonies grow after 48 hours’ incubation at 37 °C on Columbia blood agar.2, 5, 6

The epidemiology of Bolo disease has not been thoroughly investigated. It has only been diagnosed in Merino and Dohne Merino sheep.1 The prevalence of the disease is not related to seasonal changes or to prevailing weather conditions, although it appears to be more prevalent during years of drought.2

Preliminary surveys have indicated that the disease is most common in ewes and wethers. It affects sheep older than two to three years, and is more severe and of longer duration in older animals; lambs are rarely affected. Sheep with medium-fine to medium-strong wool and whose fleeces have a high yolk content are more frequently affected.

Themodeof transmission has not yet been established, but close contact, dipping and shearing are likely factors. Modern dips rarely contain bacteriostats and are thus ideal reservoirs for bacteria. Shearing has an irritant and disruptive effect on the superficial layers of the skin, thus allowing organisms to penetrate with greater ease and the infection to be established. Floors of shearing sheds and the equipment and clothes of shearers contaminated with scales and other skin debris from affected sheep may act as potential sources of infection.

Bolo disease usually starts as a well-circumscribed, localized, mild lesion in two- to three-year-old animals. The condition is chronic and progressive, and lesions increase in size and severity as the animal ages, with the most outspoken lesions seen in animals in a poor condition.3 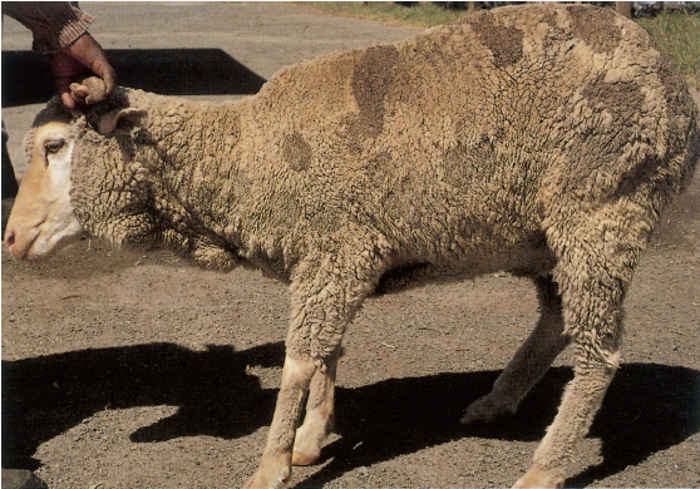 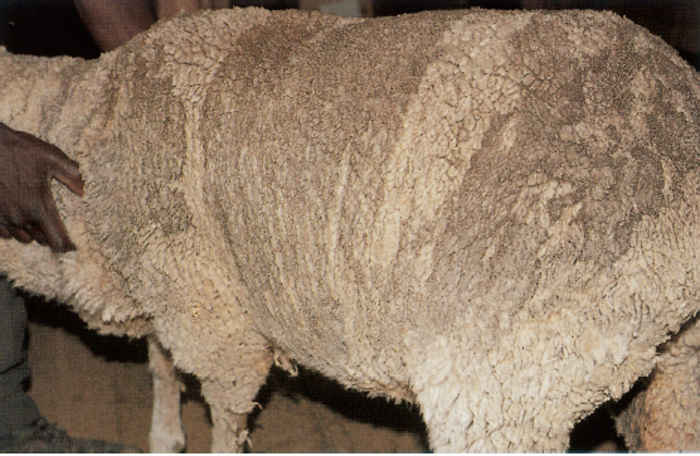 The lesions are most frequently distributed on the neck and shoulders, but are also relatively common on the rump and flanks. In advanced cases with extensive lesions the skin of the back may be involved, but even in such animals the abdominal skin is rarely affected.1–3 The fleece over the affected areas has dark grey to blackish, usually wellcircumscribed spots, patches or bands. These areas vary considerably in size, from 20 mm in diameter to large patches covering a greater part of the body, (Figure 191.1 and Figure 191,2).

The tips of the wool in the affected areas are spiky and the wool is shorter and less dense, while the skin is often tender.1, 2 On parting the wool in affected areas, yellow to greyish-white, sticky, scaly deposits are found adjacent to the surface of the skin. These deposits cause the wool fibres to adhere to each other, resulting in the spiky staple formation. Dirt and dust adhere to the sticky deposits, thus causing the dark colour of the fleece. Loss of crimp in the staple of the wool fibres also occurs in the affected areas. In recently shorn sheep the lesions are well-circumscribed, pearly-white plaques and patches (Figure 191.3). The fleece of affected sheep has a characteristic, unique odour.