Bovine ephemeral fever (BEF) is an infectious disease of cattle and water buffalo (Bubalus bubalis) caused by an arthropod-borne ephemerovirus  and is characterized by short duration, fever, stiffness, and disinclination to move, but which in most cases results in complete recovery.

The first recognition of ephemeral fever as a major disease in southern Africa was during an epidemic in Zimbabwe in 1906, although elderly inhabitants there considered it to be the re-emergence of a disease for which they already had a name in their tribal language. Brief reference in Schweinfurth’s4 account of his exploration of central Africa takes its history back a further 40 years to 1868–71. The first scientific account from Africa, giving an excellent description of an epidemic in Egypt in 1895, was in a prize-winning essay by Piot, a French veterinarian.41 It was not until 1936 that BEF was recognized in Australia and, much later again, in Japan.

The name of the disease has varied: ‘Dengue of cattle’;41 ‘drie-dae-stywesiekte’ (Afrikaans); ‘three days’ or ‘three-day stiffsickness’ in Africa and Australia; and ‘bovine epizootic fever’ in Japan.29 The term ‘ephemeral fever’, coined sometime between 1908 and 1910 in southern Africa, is the most widely used name.4 The obvious losses caused by BEF are loss of milk production, loss of draught power, abortion, and infertility in bulls and occasionally deaths of valuable animals as well as the expense of care or treatment and vaccines.48 The insidious losses result from a decrease in muscle mass during the time of the year when weight gain should be most rapid.

Bovine ephemeral fever is regarded as an important exotic disease in Europe and the Americas and the virus may be handled only in high security laboratories there. This seems paradoxical in view of the dependence on mosquitoes for its transmission.

Bovine ephemeral fever virus (BEFV) belongs to the family Rhabdoviridae, genus ephemerovirus. It is a single-stranded negative sense RNA virus with five structural and one non-structural protein.69 Van der Westhuizen66 first illustrated the bullet-shaped morphology (Figure 1) by electron microscopy after his pioneering isolation of BEFV. Other than full bullet shapes, there are shortened forms and cones, which are probably defective interfering particles with uncertain antigenic characteristics.

Bovine ephemeral fever virus is susceptible to both high and low pH27 and does not survive long outside its vertebrate or invertebrate host. It is rapidly inactivated by the high concentrations of lactic acid which develop in the muscles of cattle after death. Fomites, body discharges or tissues therefore play no part in the transmission of BEF.

There is no evidence of immunogenic diversity within the BEFV population.45 Epitope mapping has demonstrated antigenic variation.12 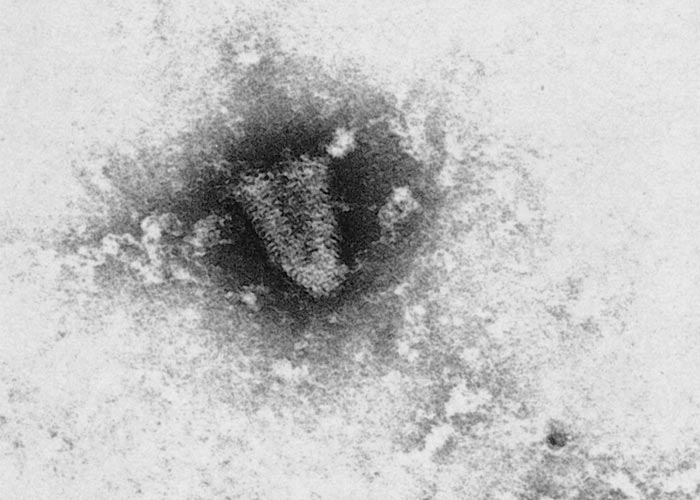 For many years BEFV was considered to be unrelated to other. However, antigenic and genetic similarities to BEFV have been found in Kimberley, Berrimah and Adelaide River rhabdoviruses,14, 23, 24 which are now classified in the genus Ephemerovirus. Therefore, any virus isolated from a suspect case of BEF must be identified by tests using monoclonal antibodies, virus-specific RT-PCR or nucleic acid sequencing. A neutralization test using BEFV-specific antiserum is an alternative. Group reactive fluorescence tests have limited value. Furthermore, infection of cattle with related viruses can induce low titres of neutralizing antibodies to BEFV. Consequently, serological surveys of cattle and wildlife that have been conducted exclusively with BEFV do not provide definitive evidence of infection with this virus. Since Africa has a rich store of rhabdoviruses, it is likely that further antigenically related viruses will be found.

It is a curious feature of BEFV that it replicates poorly, or not at all, in tissue cultures of bovine origin and induces high titres of interferon. Furthermore, the virus also appears to lose antigenicity for cattle with repeated passage in cultures of baby hamster kidney, hamster lung or monkey kidney tissue cultures.31

The seasonal occurrence of BEF suggested insect transmission to the early investigators in Africa.4, 5, 22, 56 Epidemiological and pathogenesis studies implicate mosquitoes as the important vectors of BEFV. The range of species involved is likely to be wide as BEFV has been isolated from culicine (mixed pool) and anophilines (Anopheles bancroftii)46 and detected by real-time reverse transcription PCR (qRT-PCR) in Culex annulirostris20 in Australia. It has not yet been isolated from mosquitoes elsewhere in the world.

Experimental transmission is only achieved when BEFV infected blood is injected into the bloodstream. Mosquitoes feed by inserting their mouthparts and saliva directly into...