The virus was first isolated from cattle in Switzerland in 197040 and has subsequently been found worldwide. Its prevalence and importance in Africa is largely unknown, although antibody to it is widespread in feedlot cattle in South Africa.61

The virus is classified as a member of the genus Pneumovirus in the family Paramyxoviridae. Virions are pleomorphic, enveloped and measure 80 to 500 nm in diameter for the round and pleomorphic forms (Figure 1), and up to 5 microns in length for filamentous forms (Figure 2). The elongated nucleocapsid is helically coiled and tortuous and contains single-stranded RNA.

The envelope contains transmembrane surface glyoproteins, but, in contrast to ortho- and paramyxoviruses, pneumoviruses lack neuraminidase and haemagglutinin. Virions mature by budding from the cytoplasmic membrane.

A wide range of cell cultures are susceptible to infection with BRSV, including those prepared from most bovine tissue types, as well as kidney cells of pigs, hamsters, monkeys and humans.38 Cytopathic effects are characterized by multinucleate syncytial cell formation, intracytoplasmic inclusions and necrosis. 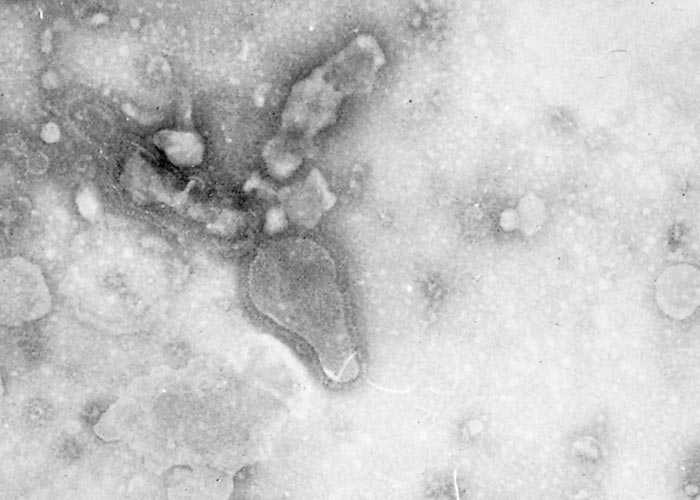 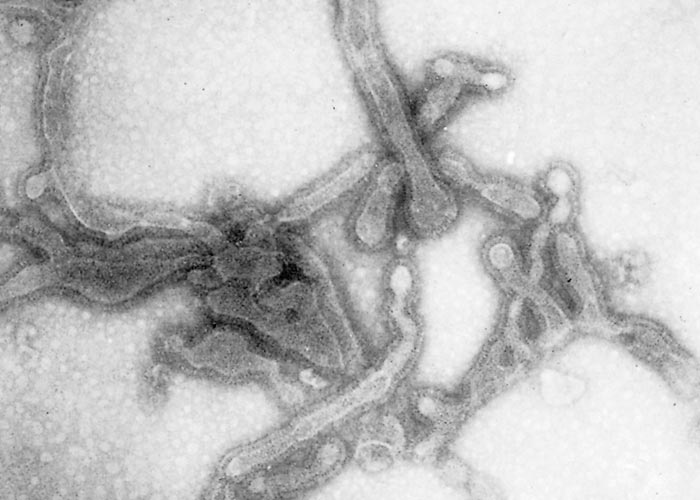 Cattle are probably the principal reservoirs of the virus. Sheep and goats may also be infected but their role in the epidemiology is not clear, and inapparent infections are common in these species.2, 15, 19, 20, 32, 37, 43

Since the initial isolation of BRSV in Switzerland in 1970, the virus has been detected worldwide in cattle herds, with rates of infection impacted by multiple factors. In some countries, it has been estimated that frequency of BRSV exposure exceeds 50 per cent in some dairy and beef herds.28 Respiratory disease due to BRSV is most severe in calves less than 6 months of age, and infection can occur in the presence of maternal antibody. In some geographic areas, by 12 months of age, exposure of calves to BRSV may exceed 70 per cent.58 Reinfection in calves is common, likely as a result of reintroduction of BRSV into herds.36 Spread of the infection may result from direct contact with or aerosol droplets from infected animals, or indirectly from contaminated surfaces.29 Respiratory disease in cattle in the northern hemisphere caused by BRSV occurs mainly in late autumn, winter and early spring, although outbreaks have also been reported in the summer. In addition to a role for fluctuations in temperature, risk of BRSV infections can be impacted by stresses associated with weaning, transport, handling, crowding, and mixing of cattle from different sources.

The severity of clinical disease caused by BRSV is dependent on the age and immune status of the calf, the route of infection, and the strain of the virus.8 Some strains are significant primary pathogens of young cattle because, acting alone, they are capable of causing severe damage to the lower respiratory tract.12, 39, 45 However, the virus more frequently predisposes the respiratory tract of cattle to the pathogenic effects of secondary bacterial infections.6

The virus replicates in epithelial cells of the nasal cavity, pharynx, trachea, bronchi and bronchioli, and in type II pneumocytes and alveolar macrophages. It induces cytopathic changes characterized by loss of cilia and/or necrosis of bronchial and bronchiolar epithelial cells.11 The virus also alters opsonization and phagocytosis by alveolar macrophages.38, 56  Reduced mucociliary clearance resulting from a loss of cilia is...