A number of poisonous plants and fungi can cause nervous signs in livestock in southern Africa. Since no chemical analyses are available for the diagnoses of these neurotoxicoses, the only clues to the identity of the aetiological agents involved may be provided by the lesions in the central nervous system (CNS).

Where no pathological lesions are discernible, a diagnosis must be made merely on circumstantial evidence, such as the presence of a grazed toxic plant/fungus capable of causing the observed nervous signs. Sometimes recognizable fragments of plants, such as the pods of Albizia tanganyicensis or pieces of Cynanchum ellipticum in the rumen, may aid in the making of a diagnosis.

Since pathological lesions are among the most reliable criteria on which diagnoses can be made, the neurotoxicoses have been divided into two groups, depending on whether or not notable lesions are present in the CNS.

Diplodiosis is a southern African neuromycotoxicosis of cattle and sheep, grazing on harvested maize lands in winter. The disease, caused by the ingestion of maize (Zea mays) infected with S. maydis, is characterized by ataxia, paresis and paralysis.111, 124, 125, 135, 136, 202 In addition, the offspring of dams that had been exposed to infected maize may be stillborn or non-viable.106, 109, 110, 160

Diplodiosis is one of the commonest nervous disorders of cattle and sheep in southern Africa where, in South Africa alone, it is believed to be responsible for 2% of all mortalities from plant poisonings and mycotoxicoses.106 Together with facial eczema in New Zealand and lupinosis in Australia, diplodiosis is one of the most important mycotoxicoses of ruminants in the world.110

The fungus causes a stem and ear rot of maize. The ear rot often starts at the base of the cob where a coarse white mycelial mat is formed that turns the invaded kernels a greyish-brown colour. Characteristic black fruiting bodies or pycnidia, seen as pinhead-sized spots, are produced on the affected parts towards the end of the growing season (Figures 1 and 2). Without these black spots S. maydis is difficult to distinguish macroscopically from Fusarium verticillioides or other fungi on the cobs. The fungus overwinters in the pycnidial form on maize residues. Air or insect-borne conidia infect the new crop in summer, usually from the flowering stage onwards, when the plants become senescent.89, 123, 207

Stenocarpella maydis is encountered throughout the world wherever maize is grown,123 but apart from a rare report of a suspected outbreak in Australia,49 diplodiosis is known to occur only in southern Africa. The isolation of toxigenic strains of S. maydis from bulk consignments of maize imported from North and South America is, therefore, puzzling in the light of the absence of diplodiosis in these continents.111 Marasas124 suggested that the lack of recorded outbreaks outside southern Africa could be attributed to a combination of factors including agricultural practices (only in southern Africa are reaped lands extensively grazed for winter forage), variability in toxicity of naturally infected maize, variability in the toxigenic potential of S. maydis strains and differences in the susceptibility of animals. 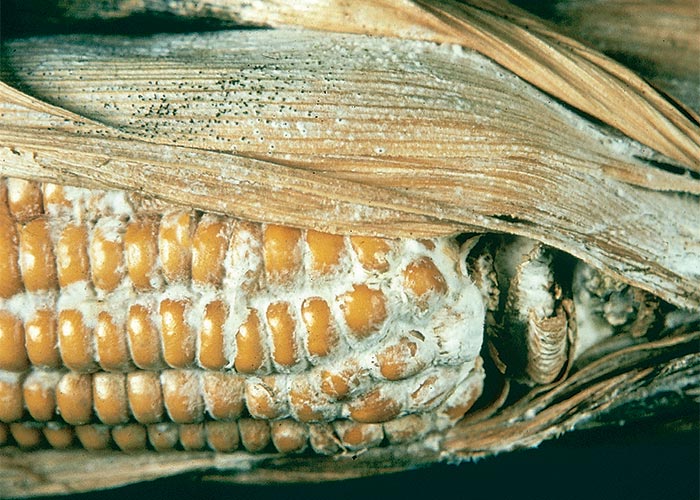 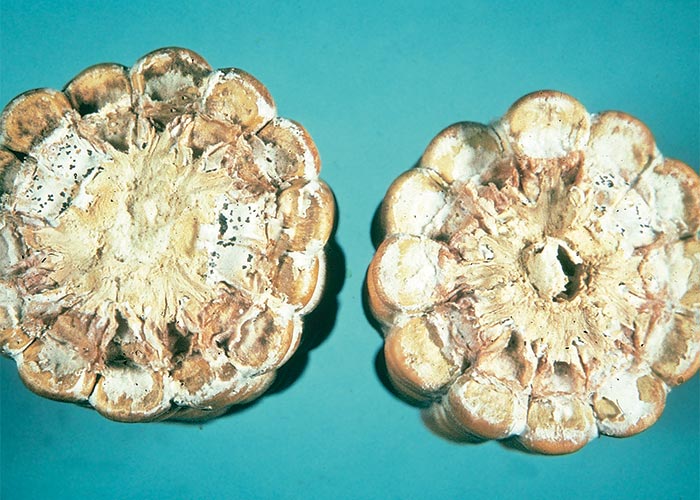 Toxic compounds have been isolated from S. maydis cultures191 but these have not been tested for neurotoxicity in ruminants. Until the neurotoxin is known, diplodiosis will continue to be experimentally reproduced only by feeding naturally infected maize or pure cultures of the fungus or their extracts to ruminants.111, 135, 136, 178, 202 Cultures can be prepared by incubating sterile moistened maize seeds, inoculated with conidia, for at least eight weeks at 28 °C.111, 123, 124, 162 The duration of incubation is of critical importance as cultures grown for less than eight weeks apparently are non-toxic.111, 123, 124, 162 However, not all isolates cultured for eight weeks are neurotoxic,109, 111 e.g. 63 kg of culture, lethal to ducklings, failed to induce ill effects in a 320 kg cow (C.J. Rabie and T.S. Kellerman, VRI, Onderstepoort, unpublished data, 1980). This lack of correlation between mortality in ducklings and diplodiosis casts doubts on the suitability of ducklings as a model for the bioassay of chemical fractions in the isolation of the bovine neurotoxin.

Among the reasons offered for only ruminants being affected by diplodiosis is that the nervous systems of monogastric animals are refractory to the toxin or that a precursor is bioactivated to a toxic substance in the rumen. The recent induction of diplodiosis in laboratory animals with extracts of S. maydis cultures showed that the active principle was a primary toxin and removed a major impediment to the extraction of the neurotoxic component, namely the lack of a biological assay for testing the toxicity of chemical fractions. Using a guinea-pig bio-assay, with typical paretic signs as guide, the neurotoxic principle(s) of a culture has now been purified by column chromatography to a few components (L.D. Snyman...