Coccidiosis is a protozoal disease that occurs in many mammalian and all domestic livestock species. It is caused by infection with species of the genera Eimeria or Cystoisospora (syn. Isospora) and is characterized clinically in livestock by enteritis, following the invasion of cells of the gastrointestinal tract. Subclinical infections are frequent. The disease is relatively common in sheep, goats and cattle and occurs mainly in young animals, although all age groups can become infected and shed parasite stages.

Coccidiosis occurs universally, but is most prevalent where animals are subjected to overcrowding, unhygienic environments, or where other stress factors are present. Eimeria spp. are important causes of the disease in poultry, cattle, sheep and goats. Coccidiosis is rare in horses52 and in Europe and North America is an important disease of pigs.98 Although a number of Eimeria spp. are commonly found in pig faeces, clinical disease is caused only by infection with Cystoisospora suis (syn. Isospora suis). Coccidiosis due to C. suis has not yet been described in southern African countries, but it is associated with clinical disease of very young piglets in many other parts of the world.

Coccidia are generally host-specific, and, in the gut, specific to a particular location. Host specificity is stringent in both Eimeria and Cystoisospora infections. Economic losses from coccidiosis due to mortality, poor performance, and the cost of treatment and prevention may be considerable, especially on stud farms and in intensive breeding and rearing systems.

Diagnosis of an infection with coccidia is accomplished during the phase of oocyst shedding; numerous stages can be found in the faeces upon coproscopy. Since differences in the pathogenicity of the species can be of clinical significance, differentiation of coccidial species is necessary in mixed infections.78 Both morphological and biological characteristics are used to identify the species of coccidia.52 The most important stage for species differentiation is the oocyst (see below), but reliable differentiation is often only possible at the fully infective sporulated stage and can be cumbersome and in some cases unreliable and subjective. For more accurate identification computer-assisted image analyses have been used in cattle91 and pigs.81 PCR-based differentiation is possible and has been developed for several host species,49, 68, 88, 110 but it is not routinely available in diagnostic laboratories. In poultry Eimeria species are not readily differentiated by oocyst morphology, and in these host species post- mortem examination of intestinal lesions is used to diagnose coccidiosis instead.42

The developmental cycle of the parasite occurs intracellularly within the host (see below), while the final infective form, the oocyst, is passed into the external environment. Oocysts of mammalian livestock can be distinguished by their shape and size, the morphology of their contents, the appearance of their surface (particularly the colour and texture), and the thickness of the wall.57, 81 Variation of oocyst morphology occurs within species, and in heavy infections oocyst formation can result in aberrant forms.11 In a typical sporulated oocyst of the genus Eimeria (Figure 1), the oocyst wall is composed of one or two layers and may have a micropyle, which in turn may be covered by a micropyle cap. An oocyst or sporocyst residium, consisting of material remaining after the formation of these structures, may be present. A sporocyst may have a knob, the Stieda body, at one end.44, 52 At sporulation oocysts of the genus Eimeria develop into four sporocysts, each containing two sporozoites, while those of the genus Cystoisospora have two sporocysts, each of which contains four sporozoites (Figure 2).

Figure 1 Structure of a sporulated Eimeria oocyst. (Adapted from Levine, 198552) 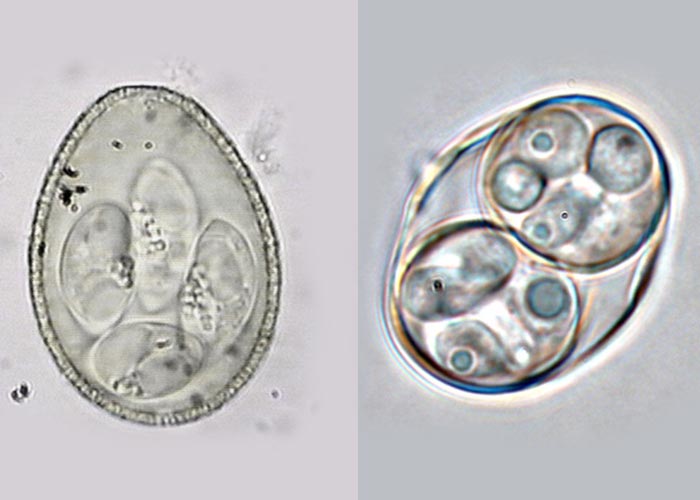 Coccidia of livestock are primarily intracellular parasites of the gastrointestinal tract, but in some animal species they may be found in other organs such as the liver or kidneys,52 or even the uterus.63 Development in the coccidia mentioned in this chapter occurs by means of an initial asexual cycle (merogony), followed by a sexual one (gamogony). Both take place in the same host (Figure 3). The final phase of development is the sporogony. Which in Eimeria and Cystoisospora occurs in the environment. The life cycle from ingestion of infectious oocysts to shedding of stages (prepatent phase) usually takes 5-17 days (rarely >20 days) depending on species.52 It is temperature and humidity-dependent. Following ingestion of infective sporulated oocysts by a susceptible host animal, the sporozoites...