Infections with parasites of the genus Cryptosporidium are a common finding in a variety of mammals, birds, fishes, and reptiles. The infections are often subclinical, but they may give rise to clinical disease characterized by lesions in the gastrointestinal tract followed by the development of diarrhoea with an occasional fatal outcome. This is particularly so in neonatal animals or humans or immunocompromised hosts.

Cryptosporidia are very small coccidia that were first described by Tyzzer in 190754 from the intestine of normal mice. Until 1955, when they were incriminated as a cause of disease in turkeys, they were thought to be commensals,50 but since then, diarrhoea associated with Cryptosporidium spp. has been reported in lambs,7 kids,58 piglets,59 immunologically deficient foals,51 and humans.42 Bovine intestinal cryptosporidiosis was first described in 1971 in the USA,44 and subsequent reports from the UK,57 Canada,40 Australia,28 and Germany24 indicate a wide geographical distribution of the parasite.26, 37

Cryptosporidiosis has also been identified as one of the five most important causes of diarrhoea in young children in Africa, Asia, and South America.45 Livestock infections are a common source of water- or food-borne infections in humans.14

Cryptosporidium spp. are protozoa assigned to the phylum Apicomplexa, class Coccidia, order Eucoccidiorida, and suborder Eimeriorina of the family Cryptosporidiidae.13 In livestock, most of the parasites complete their life cycle in gastrointestinal epithelial cells.56 The life cycle of Cryptosporidium spp.resembles that of other intestinal coccidia but differs in that the parasites develop just under the surface plasmalemma of the host cell.30 In young animals the life cycle is completed in three to four days, which is shorter than the life cycle of most other coccidia.

Cryptosporidium spp. infect a broad range of vertebrate hosts.19 Cryptosporidium parvum is associated with disease in a wide range of mammals including ruminants, pigs, mice, and humans.  Some  Cryptosporidium spp.have a higher host specificity for certain mammalian hosts e.g. C. canis (dogs), C. felis (cats), C. hominis (humans), C. muris (mice), and C. wrairi (guinea pigs), causing pathogenic effects similar to C. parvum in their respective hosts. In cattle, there is an additional species residing in the epithelium of the peptic glands of the abomasum, C. andersoni, which has not been associated with disease. Birds are commonly parasitized by C. meleagridis (turkeys mainly, but infection may spread to humans), C. galli (chickens), or C. baileyi (gallinaceous birds, water fowl, and others). Reptiles often harbour C. saurophilum or C. serpentis (snakes, lizards). Fish may be infected by C. molnari.62

Following ingestion of oocysts by the host, sporozoites are released into the intestine where they penetrate the brush borders of the epithelial cells to develop into meronts. Although organisms appear to be attached superficially to cells, all stages are intracellular and are contained within a parasitophorous vacuole  situated between the cytoplasm and outer cell membrane.19 The parasite is surrounded by the microvillous membrane, which fuses with the epithelial plasma membrane to form a thickened adhesion zone at the point of attachment to the host cell (Figure 1) There is also an adjacent comb-like structure formed by a folding of the parasite pellicle.43 These specialized structures are thought to facilitate the intake of nutrients by the parasite from the host cell. The meronts are 2 to 5 μm in diameter and contain eight merozoites that are released into the lumen of the gut. Second-generation meronts may occur, and these will contain four merozoites when mature. These merozoites invade new host cells where they undergo gamogony by forming macro- and microgamonts. The microgamont has sperm-like microgametes which, when released, fertilize the macrogamonts, which then develop into oocysts. Oocysts are round or ellipsoidal, and contain four sporozoites. It is generally accepted that sporocysts do not occur.32 Sporulation takes place within the host cell and is followed by the development of a resistant thick wall around some of the oocysts, which are shed in the faeces.19 Other oocysts, however, do not form a thick wall and the single unit membrane surrounding the sporozoites ruptures when these oocysts are released from the host cell. These forms are invasive and can infect epithelial cells and so reinitiate the development cycle, resulting in auto-infection mainly in immunocompromised hosts.17 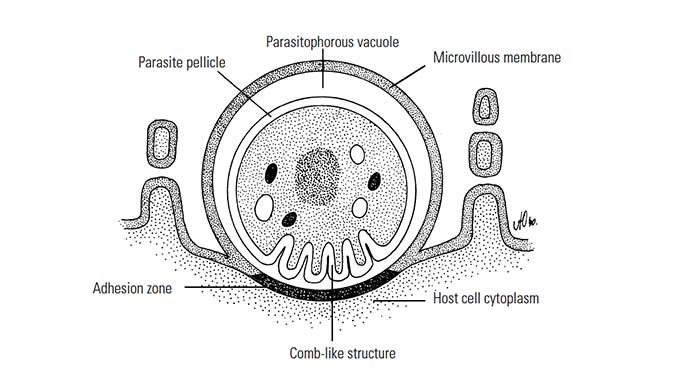 Figure 1 Line drawing of Cryptosporidium in a host epithelial cell