Dermatophilosis is an acute, subacute or chronic skin disease that affects a wide range of domestic and wild animal species as well as humans and is characterized by the development of an exudative epidermitis followed by scab formation, alopecia and thickening of the skin. The disease is caused by Dermatophilus congolensis, a facultatively anaerobic, Gram-positive actinomycete that produces motile zoospores that invade the skin. The morbidity and mortality rates of the disease vary depending on the season; it constitutes an important economic problem to livestock production, particularly during rainy seasons.

The disease was first reported in 1915 in the annual report of the Veterinary Department of the then Belgian Congo (now Democratic Republic of Congo) by Van Saceghem.269 Since then, it has been diagnosed in many tropical, subtropical and temperate parts of the world. When the disease was first reported, the causative agent was named as Dermatophilus congolensis and subsequently as Actinomyces dermatonomus,33 Actinomyces congolensis 98 and Streptothrix bovis. It is now classified as Dermatophilus congolensis.75

The disease is also known by different names depending upon the hosts affected and the clinical picture. Initially, it was named ‘contagious dermatitis’, but this name is inappropriate due to the number of infective agents known to cause bovine dermatitis. The commonly used term ‘mycotic dermatitis’ in sheep and cattle is incorrect as it implies that the disease is caused by a fungus. The use of the term ‘cutaneous streptothricosis’ is also incorrect as it implies that the aetiological agent is a Streptothrix sp. Similarly, the terms ‘nocardial dermatitis’ and ‘cutaneous nocardiosis’ are also inappropriate.

Dermatophilosis is of economic importance because it can cause great losses to the livestock and leather industries. 3, 71, 84, 102, 124, 173, 176, 229, 260 These are mainly attributed to poor quality of hides and skin and to low meat production as affected animals may lose weight and become emaciated. Other losses are the result of decreased milk production, decreased working capacity of draught cattle,120 forced culling of infected animals before they reach market value, and death in severe cases. The disease in cows can cause as much as a 20 per cent drop in milk production.163, 178 However, the reduced growth rate of calves suckling affected cows is considered to be more the result of the lesions on the udder and teats than the decreased milk production.98 Severely emaciated cows may show anoestrus.

The fertility of terminally affected bulls may be reduced as a result of abnormalities in spermatozoa; sterility may even occur.188 In woolled sheep, economic losses result from damage to the fleece and hides.27, 259, 275 The scabs on severely affected sheep may also cause considerable inconvenience as a result of loss of time and breakage of machines during the shearing process. In Australia, the most important economic effect is as a consequence of secondary blowfly strike of the lesions in sheep.72

Dermatophilus congolensis is classified in the family Dermatophilaceae, order Actinomycetales. It is a pleomorphic, aerobic and facultatively anaerobic, Gram-positive bacterium which produces zoospores. On germinating, the zoospores bud to produce a filament that is less than 1 μm wide, which later forms right-angled lateral branching. Initially transverse and then longitudinal septa develop in the filaments, giving rise to parallel rows of encapsulated coccoid cells, 1,5 μm in diameter (zoospores) of equal size that can either be single-stranded or up to eight rows wide (Figures 200.1 and 200.2).77

All these structures are observed in smears made from lesions but may appear fragmented as a result of the smear making process.

The zoospores can remain dormant in the absence of any adequate stimulus, such as moisture, and, when in this state, are highly resistant to desiccation and may even remain viable after heating to 100 °C for up to 30 minutes. They lose their outer capsule and become motile by means of a tuft of flagella within 24 hours with the advent of warm, humid conditions, and can migrate from the moist scabs of the skin lesions that are induced by them.207, 212 Motile zoospores are not very resistant to physical and chemical changes such as pH, osmotic changes and desiccation; these result in decreased viability after a few hours outside the scab lesions, but in a favourable substrate, such as the persistently moistened skin of a suitable host, they lose their motility, and germinate. 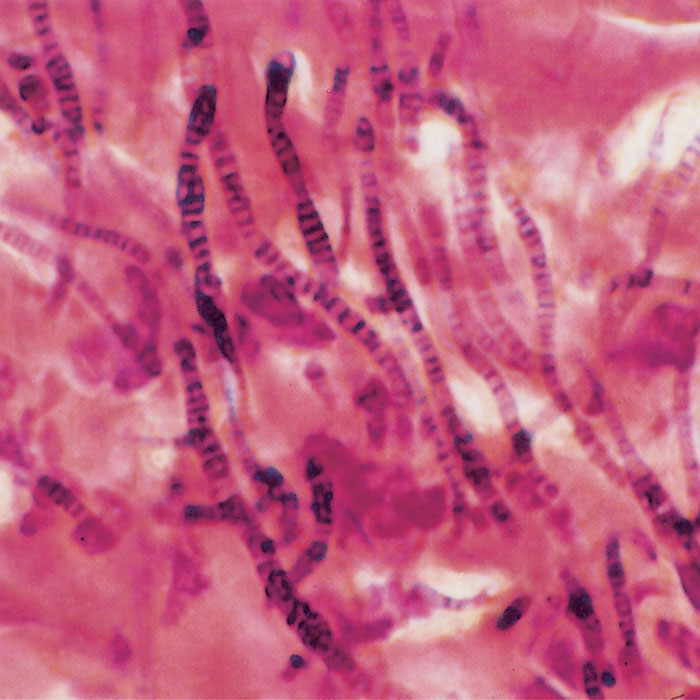 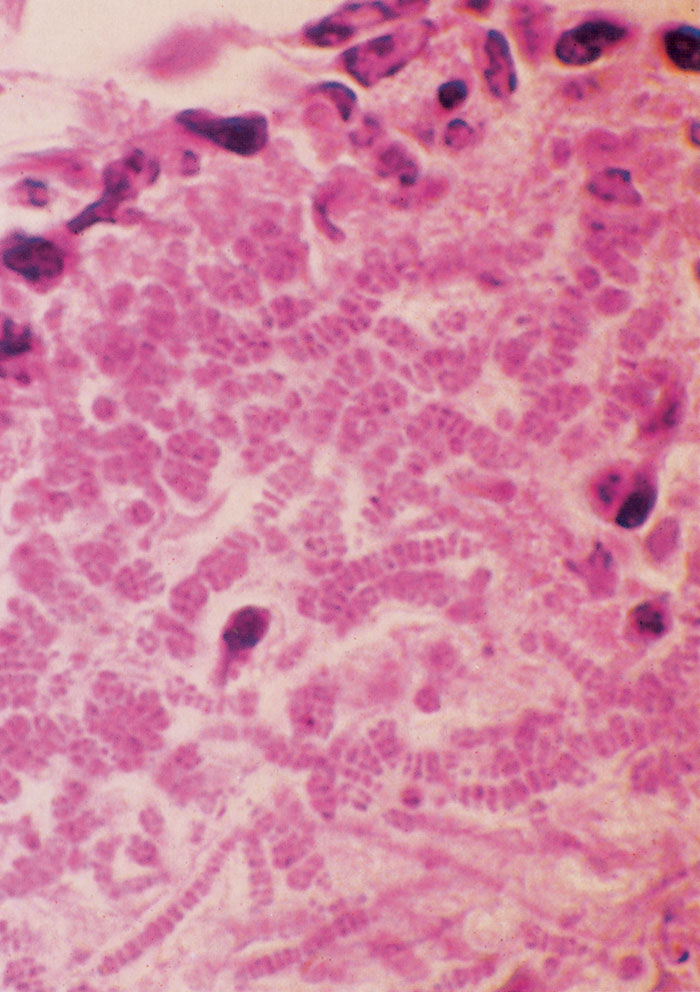 Figure 200.2  Transverse and longitudinal septation of filaments of Dermatophilus congolensis

Dermatophilus congolensis grows best in an atmosphere containing 10 per cent carbon dioxide.76, 137, 211 There is pronounced haemolysis on media containing sheep but not horse blood,77 and aerial filaments are more profuse. The bacterium can grow at a temperature of 22 to 37 °C, but the optimum growth temperature is 37 °C.137 It can...