Epivag is an insidious, infectious venereal disease of cattle that is characterized in cows by an anterior vaginitis with a thick, tenacious, mucopurulent discharge from the vulva, and in bulls by chronic epididymitis and seminal vesiculitis that results in fibrosis and induration of the epididymis, seminal vesicles and testes. The fertility of affected cows is usually impaired, but abortion is not a feature of the disease. In bulls the disease usually results in reduced fertility, and complete impotency in some. Because the lesions that develop in the genital organs of both sexes are basically those of an epididymitis or vaginitis, the name ‘epivag’ was coined for the disease.4

The condition appears to be confined to Africa. It was first described in Kenya by Daubney, Hudson and Anderson in 1938,1 and has since been diagnosed in Zimbabwe and South Africa.12 Earlier reports in South Africa indicate that the disease was most prevalent in what is now Gauteng and Free State provinces, but it has occurred to a lesser extent in KwaZulu-Natal Province. In South Africa, at present, the disease is only sporadically encountered in poorly managed dairy herds in which natural breeding is practised. Although no reports are available, the same situation most probably prevails in other countries in southern, Central and East Africa.

The aetiology of the disease has not, as yet, been elucidated, but, in view of its epidemiology, one or possibly more infectious agents are thought to be involved. The consensus of opinion is that epivag is caused by a virus, but all attempts to determine its aetiology have failed. Bovine herpesvirus 1 has been isolated from seminal plasma and vaginal discharges of affected animals.2, 5, 6, 9 However, experimental attempts to reproduce the disease by infecting cattle with it, and with bovine herpesvirus 4, have been unsuccessful.7, 8, 10, 11

Epivag spreads in herds in which the cattle are allowed to breed naturally; it does not occur in herds in which artificial insemination is practised. Affected bulls in the early or advanced stage of the disease transmit the disease venereally to susceptible heifers and cows. Similarly, infected females with mild or severe vaginitis may cause venereal transmission of the infection to susceptible bulls. It would seem that females are still capable of spreading the infection venereally to bulls several months or perhaps even years after they have apparently recovered from the disease.

According to Van Rensburg,12 the disease is more acute in some herds than in others; environmental conditions, such as climate and possibly also nutritional factors, may influence the severity of the disease.

Clinical evidence of the infection in bulls may only be detectable four to ten weeks after natural service of an infected cow. The earliest lesions following infection are seminal vesiculitis and a slight palpable enlargement of one or both of the spermatic cords. Eventually the epididymes and testes also become involved. The latter lesions usually commence unilaterally, but in the later stages of the disease are often bilateral. The libido of bulls with early or advanced lesions is usually unimpaired; affected bulls may therefore continue to serve and spread the infection. In some bulls, however, the libido is reduced and they may even become completely impotent.

The acute lesions in the seminal vesicles are characterized by enlargement and pain on palpation. When evaluating the size of the seminal glands, cognizance should be taken of the variable size of these glands in healthy bulls. In chronically affected bulls the glands are enlarged, firm, usually not painful on palpation, and the lobulation is less distinct (Figure 212.1).

In naturally occurring acute cases, an initial diffuse swelling, probably as a result of degeneration, of the affected testis masks the changes in the epididymis. Epididymal lesions are only evident once the testicular swelling has subsided. The tail of the epididymis may be slightly or markedly enlarged, loses resilience and elasticity, and becomes a hard spherical mass with an irregularly lobulated surface due to the chronic interstitial epididymitis and consequent ductular obstructions that develop. Later in the course of the disease, similar changes are detectable in the head of the epididymis and eventually the normal structure of the epididymis is completely replaced by fibrous tissue.3 There are adhesions between the tunica vaginalis propria and tunica vaginalis communis, and the testis becomes atrophied and the interstitial tissue fibrosed (Figure 212.2). Although the quality of the semen of affected bulls is reduced, they are still, in the majority of cases, fertile for a period before sterility supervenes. Recovery in bulls is extremely rare. 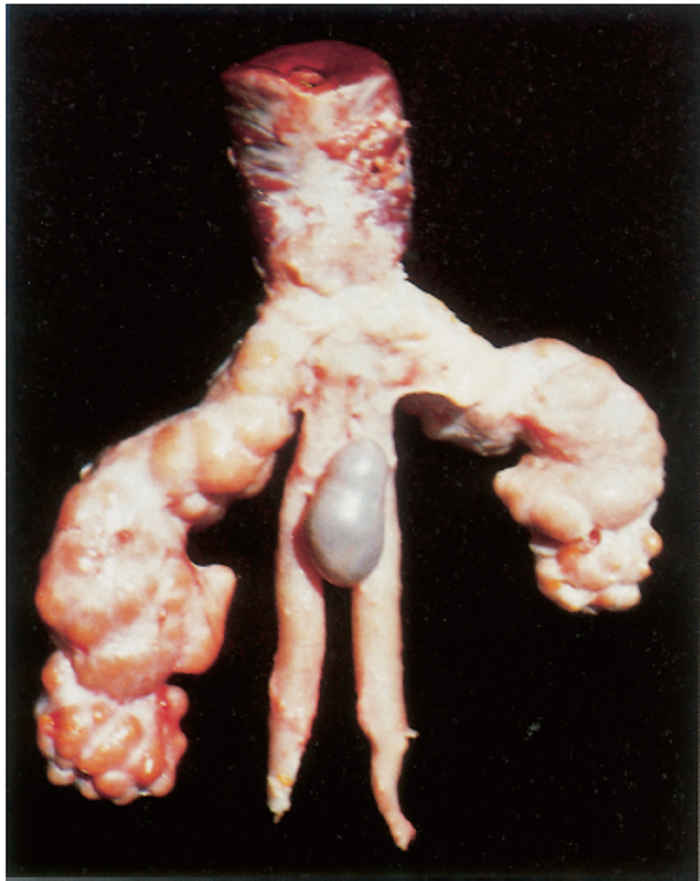 Figure 212.1 Vesicula seminalis. Note the irregular and asymmetrical enlargement of the gland as a consequence of the chronic inflammation 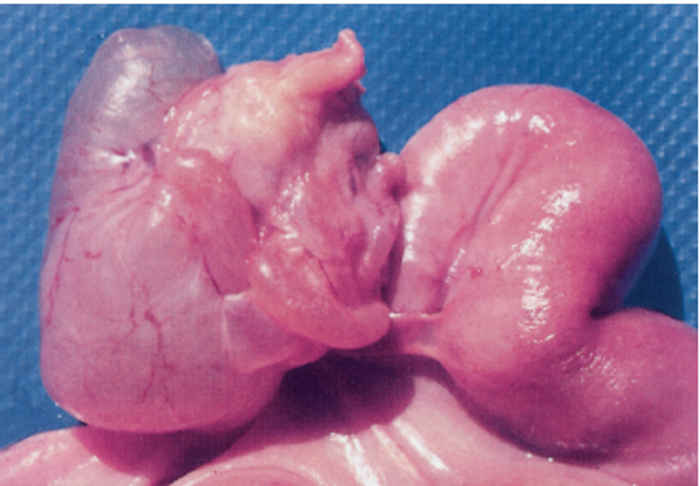 The course of the disease varies in heifers and cows. About seven to ten days after coitus a diffuse anterior vaginitis is generally detectable with the accumulation of a thick...