Equine protozoal myeloencephalitis (EPM) is a neurological disease of horses in the Americas caused by Sarcocystis neurona. The clinical syndrome was recognized in the USA by Rooney125 in the 1960s and protozoa were first demonstrated in lesions in 1974.2, 19, 29 Initially, the protozoa were considered to be Toxoplasma gondii.2, 19, 29 Dubey et al. in 197429 reported lesions and protozoa in horses and distinguished the parasite from T. gondii. He also re-examined29, 30 the  original  cases of 19742, 19 and concluded that the parasite that causes EPM was not T. gondii but probably a species of Sarcocystis, which was later confirmed by ultrastructural examination.140 The protozoan was first cultured in1991 from the spinal cord of an affected horse and was named Sarcocystis neurona.39 The development of a serological test in 199383 based on antigen prepared from in vitro cultured S. neurona merozoites led to the discovery that S. neurona infections are common in horses in the Americas.3, 4, 7, 148 The opossum was proposed as its definitive host74 and the life cycle was completed when the sarcocyst stage was identified.31 The development of an interferon gamma gene knock out (KO) mouse model for S. neurona made it possible to study its biology and chemotherapy.33, 50, 53, 54 Its genome was sequenced and annotated, potentially leading to development of  better diagnostic methods and therapies.6 The history of EPM and its biology have been fully reviewed.33, 37, 48

Sarcocystis neurona is a coccidian belonging to the family Sarcocystidae. Opossums of the genus Didelphis (D. virginiana and D. albiventris) are the definitive hosts (Figure 1).31, 50, 53, 55, 72, 74 Many other mammals are aberrant or intermediate hosts.48 Aberrant hosts are those in which only part of the asexual cycle (only schizonts) is completed; horses are aberrant hosts. Intermediate hosts are those in which the full asexual cycle (schizonts and sarcocysts) takes place. Raccoons (Procyon lotor), skunks (Mephitis mephitis), armadillos, domestic cats, and sea otters (Enhydra lutris) are its proven intermediate hosts as evidenced by excretion of S. neurona sporocysts by laboratory-raised opossums fed infected tissues.16, 60, 62, 145, 150 Sarcocystis neurona-like sarcocysts have also been reported in two dogs,152 one horse,114 one mink (Neovison vison),120 one bobcat (Lynx rufus),153 and one fisher (Pekania pennant). There is a report of brown-headed cowbirds (Molothrus afer) as intermediate host of S. neurona102 but it needs confirmation because S. neurona is usually not infectious to birds.50

Horses become infected by ingesting food and water contaminated with sporocysts. The only stages of S. neurona definitively identified in horses are schizonts and merozoites, which are confined to the brain and spinal cord.39, 48 (Figure 2) The precise time period and the route of dissemination of the parasite in horses are unknown.69 After oral inoculation of ponies with S. neurona sporocysts, evidence of invasion of brain occurred as early as seven days post- inoculation. In an experimental aberrant host, the KO mouse, sporozoites excyst in the small intestine and can be found in peripheral blood within one day of feeding sporocysts. Sarcocystis neurona first multiplies in visceral tissues and eventually resides in the central nervous system (CNS).32, 33, 52-54, 76 In the natural intermediate host (raccoon) schizogony occurred 7 to 22 days post- inoculation and mature sarcocysts were detected by 77 days post- infection.143 Sarcocystis bradyzoites are not infectious for intermediate hosts.65 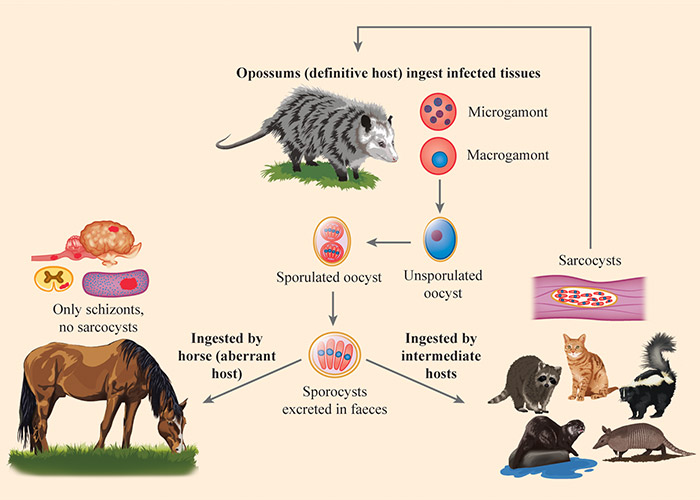 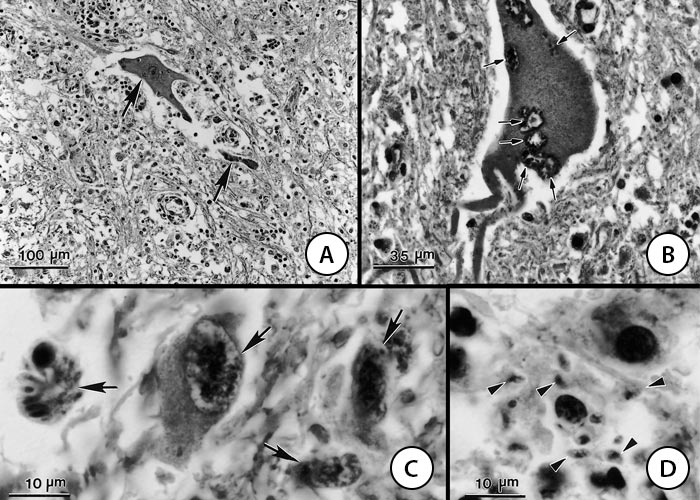 Figure 2 Sarcocystis neurona in sections of the spinal cord of a horse. Haematoxylin and eosin stain

Sarcocystis neurona schizonts are found in neurons, various glial cells and resident macrophages in the brain and spinal cord.40, 48, 76, 142 They divide by endopolygeny:142 the  nucleus of the parasite becomes multilobed and eventually each nuclear lobe is incorporated into two budding merozoites (Figure 3 and