Infectious diseases of the feet of cattle

The lack of a standardized terminology is a serious limitation when studying the various infectious and non-infectious diseases of the feet of cattle.183 Different terms are often used to describe the same condition. In an effort to clarify the situation it has been decided that the name given to a particular disease should be based on the anatomical structures and the part of the feet involved (Figure 1) rather than on the aetiology, which is often of a multifactorial nature or in some conditions uncertain.183

Lameness in cattle is most commonly caused by conditions affecting the interdigital skin, or horn and corium (the latter being modified dermis) of the claws, whereas that which results from conditions affecting parts of the leg proximal to the feet (non-digital conditions) is relatively rare.129 The hind feet are affected by a greater variety of diseases and are also far more commonly involved than the front feet;7, 8  85 per cent of lesions involve the abaxial (or lateral) digits of the hind feet. In contrast, the prevalence of disease conditions in the medial and lateral digits of the front feet is more or less the same.

Collectively, the different conditions that affect the feet of cattle may cause significant economic losses. Studies have been done to determine the prevalence rates of some of them in affected herds in a number of countries.7, 8, 106, 169

The aetiologies of infectious conditions of the feet of cattle are multifactorial because of the interrelationships which exist between the infectious agents on the one hand, and the host and environmental factors on the other (see Epidemiology and Pathogenesis).

Several infectious agents, including F. necrophorum, D. nodosus, P. melaninogenica, and Trueperella (formerly Arcanobacter) pyogenes, as well as other facultative, spirochaetal and diphtheroid bacteria, have been isolated from cases of interdigital necrobacillosis and other diseases of the feet of cattle.15, 33 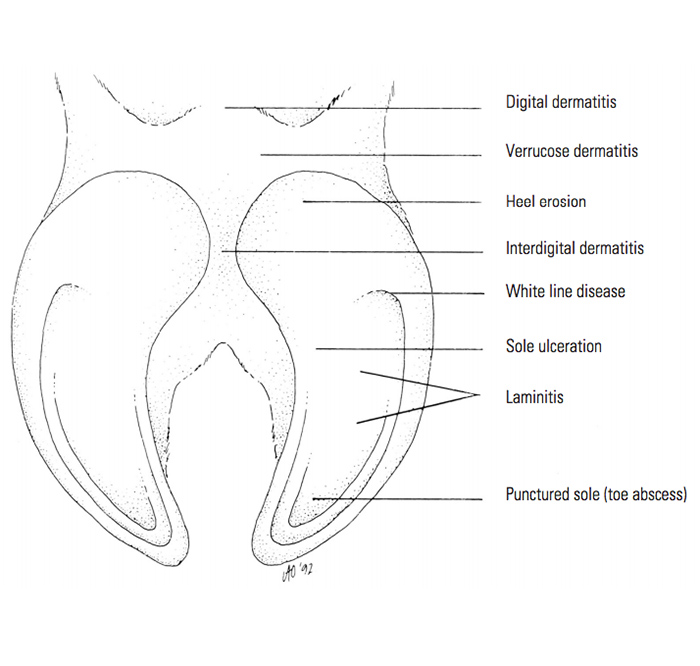 Of these bacteria, F. necrophorum is considered to be of primary importance in the aetiology of interdigital necrobacillosis, while the others, particularly P. melaninogenica, D. nodosus and T. pyogenes, may in some instances play a contributory role.15 Interdigital dermatitis is caused by benign strains of D. nodosus and is considered to predispose to interdigital necrobacillosis.33, 65, 93, 164, 168, 181, 183 The aetiology of digital dermatitis is not yet fully understood, but...