Glanders is a contagious disease primarily of solipeds caused by the bacterium Burkholderia mallei. It is characterized by nodules, ulcers and the formation of scars, particularly in the upper respiratory tract, lungs, skin, and less frequently in other organs. It may occur in an acute or chronic form, is usually fatal and is of major importance in any infected equine population. Glanders once occurred extensively throughout the world, including South Africa. At present it occurs only sporadically in eastern European countries, North Africa,14 and Asia (including India,16 Iran,4 Pakistan,15 Turkey1 and China12). It is a zoonosis.

Glanders was already recognized in 400 BC by Hippocrates, and a century later by Aristotle.8, 9 The bacterium was first isolated by Loeffler and Schütz in 1882, but it was only four years later that Loeffler demonstrated beyond doubt that it was the cause of glanders. During 1891 and 1892, no less than seven European scientists died of the disease following accidental laboratory infection.8

Glanders was spread by animal movements through trade or war to most countries of the world.8 Henning9 expressed uncertainty about the way in which it was introduced into South Africa, but in his review of the disease, Hunting8 mentions that during the Anglo-Boer War (1899 to 1902), in which 240 000 horses perished, South Africa was plagued by the spread of glanders throughout the entire country. According to Hunting, the disease was introduced into South Africa by remounts imported from the UK, America and Australia, and possibly also from Europe. Eventually, in 1929, glanders was restricted to the Cape Peninsula, from which it was eradicated soon afterwards by application of a slaughter-out policy (Figure 142.1 and Figure 142.2). This control measure and the use of the mallein test for diagnostic purposes were the major reasons for the successful eradication of the disease.

Glanders is unlikely to assume any great significance in southern Africa unless the pathogen is reintroduced under circumstances where large numbers of horses or other solipeds are kept under unsanitary conditions.

Burkholderia mallei (syn. Pseudomonas mallei, Actinobacillus mallei, Malleomyces mallei and Pfeifferella mallei) is a Gram-negative, non-motile, non-encapsulated and nonspore- forming bacillus5 which is obligately aerobic (except in media containing nitrate), is nutritionally versatile and does not require special growth factors. The best growth of B. mallei is obtained at 37 °C. Potato media are particularly suited for its cultivation.9 In vitro DNA hybridization experiments suggest a close relationship to B. pseudomallei, the causative organism of false glanders or melioidosis (see Melioidosis).

The bacterium is not very resistant against external factors. It is destroyed by exposure to direct sunlight within 24 hours and is killed by most of the common disinfectants, e.g. phenol, potassium permanganate, copper sulphate, formalin and chlorine. In damp media the organism retains its vitality for three to five weeks and in decomposing material for 20 to 30 days. It may survive for about 20 days in clean water and for about six weeks in contaminated stables.9, 14

Little is known about the virulence factors of B. mallei. A recent study demonstrated that capsular polysaccharide is a major virulence factor and the capsule may prevent efficient clearance of the bacterium by the host immune system.6

Underfed animals and those kept under unhygienic environments are more susceptible than animals that are healthy and well-cared for. Humans are also highly susceptible; the disease sometimes affects laboratory workers, veterinarians, horse caretakers and slaughterhouse employees who are in intimate contact with affected horses or the organism.

The natural disease occurs primarily in domestic equids and only occasionally in carnivores, rodents, cattle, sheep, goats, pigs and humans.13, 14 All species of domestic equids are highly susceptible. Donkeys are apparently the most susceptible and frequently develop the acute form of the disease.9 Horses are more resistant and commonly contract the chronic form. Mules occupy an intermediate position.

In acute glanders, the pathogen may be distributed throughout the body, whereas in chronic cases the organism appears to be confined to the affected organs and exudates from lesions. Although the urine, saliva, tears and faeces may be contaminated, nasal discharges and the pus from cutaneous ulcers are the most infective. The mode of infection is unclear, but it generally appears to result from contaminated food or water. Outbreaks of the disease are usually favoured where several animals are kept together and share feeding places and water troughs. The occurrence of glanders in lions in an Italian zoological park was traced back to contaminated meat originating from horses which were imported.3, 9 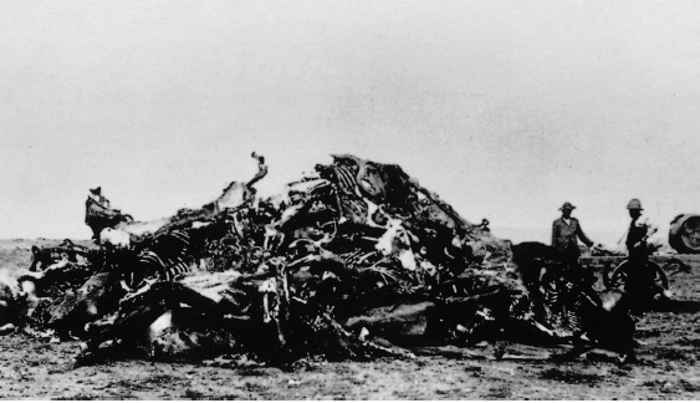 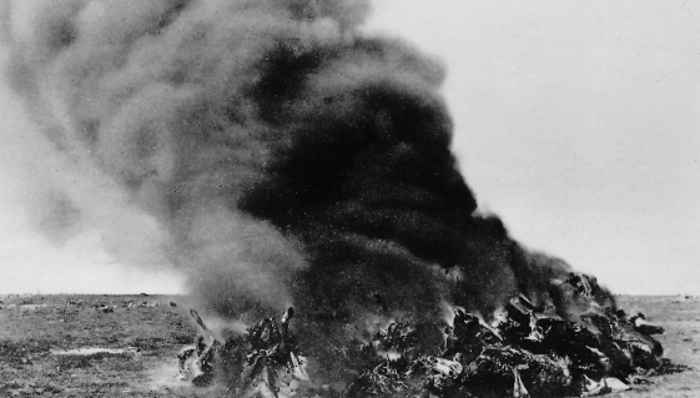 Figure 142.1 and 142.2 Historic photographs depicting mass slaughter of a herd of horses and burning of carcasses during the glanders eradication campaign in the 1920s in South Africa

The frequency of lung involvement has led to the speculation that aerogenous infection is important, yet most attempts to produce chronic...