There is much confusion in the literature regarding the nomenclature, identification and characterization of the different species or variants of aerobic bacteria which are isolated from the lesions of young rams suffering from epididymitis, or from other sites of sheep. These organisms are collectively referred to as Gram-negative pleomorphs and include: Actinobacillus seminis, Actinobacillus actinomycetemcomitans, Histophilus ovis, Histophilus somni and Haemophilus agni.

Official nomenclature and taxonomic classification have not yet been validated but it appears that there is a high degree of genetic relatedness between some members of the group. Histophilus ovis, H. somni and H. agni share similar morphological, biochemical and serological properties44, 65, 4, 15, 59 and are considered a single taxon, although this has not been officially recognized. For convenience, in this chapter they will be referred to as H. ovis. On the other hand, A. seminis can be differentiated from H. ovis on culture morphology and is not genetically related.

An acute epididymitis affecting mainly young rams and associated with a Gram-negative pleomorphic organism was first reported in New Zealand in 1955.20 Subsequently A. seminis was isolated from rams suffering from epididymitis in Australia,6 the USA47, 50, 61 and South Africa.52, 53, 55, 58, 67 Gram-negative pleomorphic organisms have also been associated with vaginitis in ewes,44 arthritis,33 mastitis,9 abortion38 and, more recently, from outbreaks of septicaemia and meningitis in lambs.23, 34, 42 Although A. seminis and H. ovis may cause epididymitis in rams, they are opportunistic and may be part of the normal flora of the genital tract.26, 60

Gram-negative pleomorphic organisms, in particular H. somni, have also been associated with a number of syndromes in cattle especially in North America. These include meningoencephalitis, pneumonia, abortion, myocarditis and arthritis27 (see Histophilus somni disease complex in cattle). As in sheep, the bacterium is also a normal inhabitant of the prepuce and vagina of healthy cattle. Transmission of infection between cattle and sheep has not been widely investigated.35

Gram-negative pleomorphic organisms are non-sporulating, non-motile, and vary in shape from that of a coccobacillus to rod-shaped. Although they grow under aerobic conditions, growth is more luxuriant in an atmosphere in which 5 to 20 per cent of air is replaced by carbon dioxide. Bacterial growth is poor on ordinary nutrient media but is greatly enhanced on a variety of media enriched by the addition of 5 per cent horse blood or inactivated horse serum.6, 49, 53, 57, 67

Epididymitis caused by A. seminis and H. ovis is mainly a problem of virgin rams up to one year of age which are maintained in intensive or semi-intensive systems on a high plain of nutrition.5, 12, 47, 50, 53, 60, 61

Rams that are clinically or subclinically infected are important in the venereal transmission of A. seminis and H. ovis to ewes for long periods, or even life-long.11, 22, 53 Ewes served by these rams may become subclinical carriers — rarely do they show evidence of overt disease — and then act as a source of infection to other ewes through mechanical transmission by rams from one ewe to another during mating. It would seem, however, that infected ewes, as well as the ewe lambs born of them, may for an indefinite period of time transmit the infection transplacentally to their offspring.53

Young ram lambs receiving a high plain of nutrition manifest early, probably hormone-induced, sexual development, which apparently creates a favourable environment for the rapid growth and multiplication of Gram-negative pleomorphic organisms harboured in the genital tract.10, 32, 43, 62, 66 There is a difference of opinion as to how infection of young virgin ram lambs occurs. Some consider that transmission mainly occurs transplacentally from infected ewes to their offspring, followed by localization in the genitalia (including the prepuce) as a result of a descending infection, while others are of the opinion that primary colonization of the preputial cavity occurs as a result of contact with a contaminated environment, such as stable floors and bedding, and that infection of the epididymis and other parts of the genital tract follows ascending infection.1, 28, 31, 39, 40 It is not clear how the genital tract infection is related to other disease syndromes such as septicaemia and meningitis but both occur in young sheep, and carrier animals have been identified in affected flocks.41 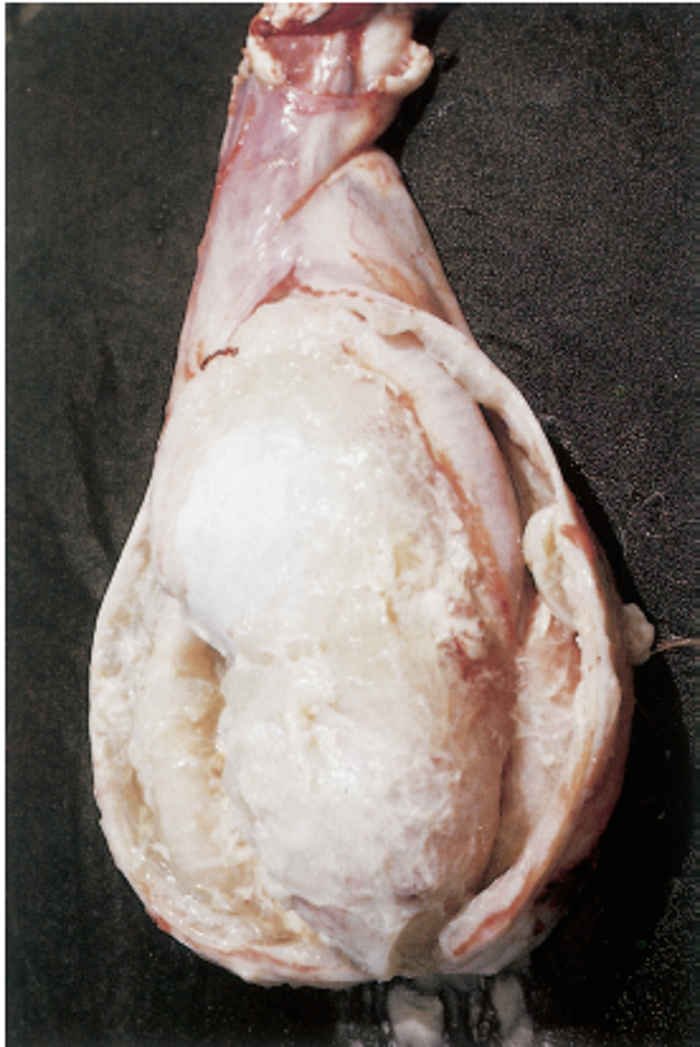 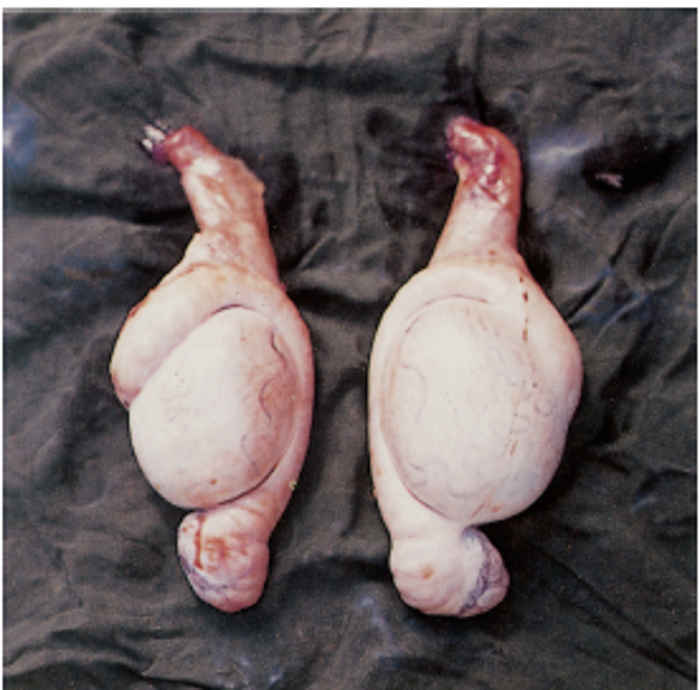 Figure 160.2 Subacute to chronic Actinobacillus seminis infection. Note the bilateral lesions in the tail of the epididymis, mild involvement of the head of the epididymis and unilateral testicular atrophy 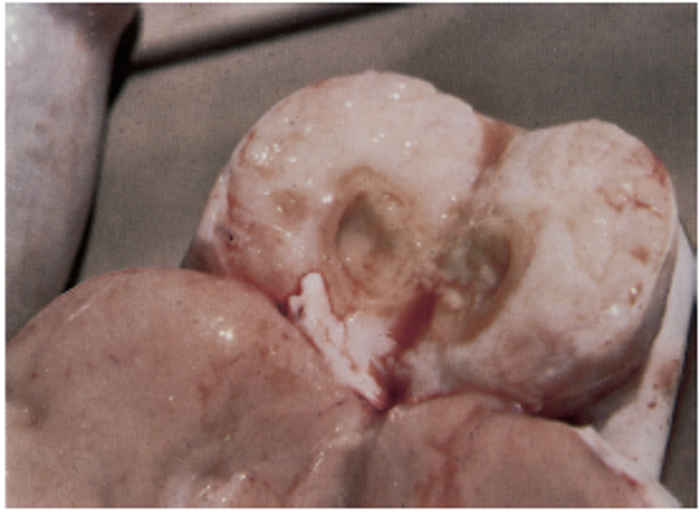 Figure 160.3 Cut surface of the tail of an epididymis showing...