This content is distributed under the following licence: Attribution-NoDerivs CC BY-ND

Commercial piggeries seldom have problems with helminths because animals are raised on concrete or slatted floors which are regularly cleaned. There is, however, a growing trend to raise pigs under semi-intensive conditions –which may result in a resurgence of helminthiasis. In rural areas, pigs infected with Taenia solium via human faeces are a threat to human health since they can develop a severe form of infection called neurocysticercosis. Pigs can also be intermediate hosts of canine tapeworms such as E. granulosus granulosus and Taenia hydatigena , which can also be human pathogens. The domestic pig is a potential host of Trichinella spiralis , which is a serious human pathogen.

The helminths which occur in the various organ systems of pigs will be discussed in this section.

These nematodes cause only minor pathology –with gastritis as an occasional finding.

These species have an indirect life cycle –using dung beetles as an intermediate host. Pigs become infected by ingesting the larval stage as a result of eating dung beetles or paratenic hosts.

The worms are non-migratory and develop in the mucosa of the stomach under the mucous layer. The pre-patent period is 6 weeks.

The adult worms of both species are similar –being small (up to 22 mm) and filiform in shape. The eggs are up to 22 mm long.

The eggs of the two species can be differentiated by their appearance and size: Ascarops eggs are small, oval and roughly 45-51 x 22-26 μm; Physocephalus eggs are thick-shelled, larvated, and roughly 34-39 x 15-17 μm in size.

The eggs can be seen in faecal samples using the flotation method.

This nematode is mainly a helminth of ruminants, but is occasionally found in the stomach of pigs (see under helminths of ruminants ) .

Ascaris suum is one of the commonest roundworms of pigs, but is, however, much over-rated as a pathogen. There is a high incidence in young pigs, and repeated infections induce partial immunity. ‘Milk spots ’–or multiple parasitic interstitial hepatitis, may if extensive, lead to entire livers being condemned during meat inspection.

The pre-parasitic life cycle takes 3 weeks to be completed. In the host, the larvated eggs hatch and the larvae migrate through the liver and then into the lungs via the trachea. The pre-patent period is 6-8 weeks.

The adult worms are pinkish, large and stout (up to 2.5 mm thick) ( Figure 74 ). The sexes can be distinguished since males are up to 25 cm long with a slightly curled tail, while females can grow up to 40 cm long and are 2-5 mm thick. The eggs are medium sized (56-87 x 46-57 μm), subspherical, and with a thick, irregularly mammillated, yellowish-brown shell.

Eggs can be seen in faecal samples using faecal flotation or faecal smears.

A. suum has a one-host lifecycle with no intermediate hosts. Most infected animals develop immunity.

After ingestion the eggs hatch in the intestine, penetrate the gut wall and the L2 larvae infect the liver. Here they undergo a second moult to L3. They reach the lungs via tracheal migration and establish themselves in the small intestine where the L4 and adult worms are found. 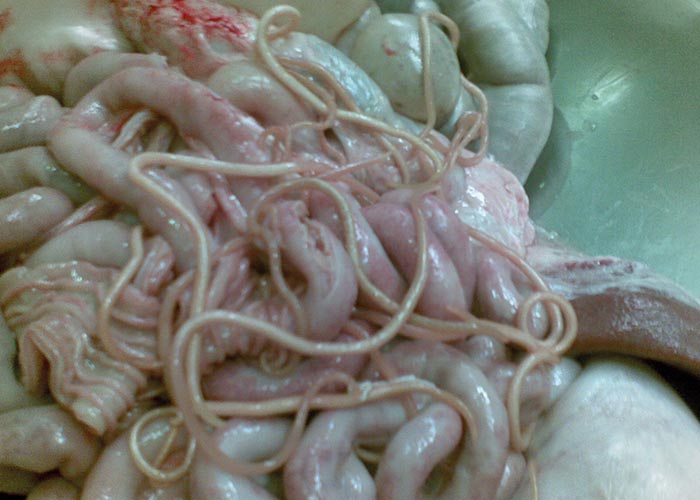 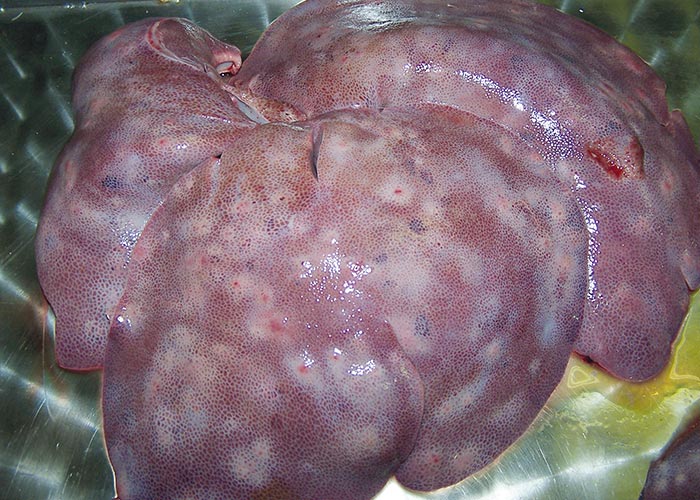 Figure 75 A. suum infected animals may have ‘milk spot ’lesions of the liver.

Liver: The migration of larvae causes multiple parasitic interstitial hepatitis (‘milk spots ’) ( Figure 75 ) –which is seen as greyish-white, pinhead-sized foci (1 cm) on the surface of liver, with reticular marking. Other aetiologies for ‘milk spots ’are the nematodes Toxocara canis and Toxocara mystax .

Lung: Multiple lesions may be seen in the lungs.

Clinical signs are seen mainly in piglets. During the migratory phase, piglets may have coughing, dyspnoea (‘thumps ’or ‘heaves ’) and nasal discharge. In the intestinal phase, piglets have one or more of the following signs: a distended abdomen sensitive to pressure, constipation accompanied by light colic, inappetence, weakness, and retarded growth.