In Europe, before vaccination campaigns against smallpox were discontinued, horses were quite frequently accidentally infected with vaccinia virus from recently vaccinated humans. The disease takes one of two forms. In the buccal form there are pox-like lesions in the mucous membranes of the mouth and in the skin of the lips and nostrils. The disease lasts for about three weeks and is not considered serious. In the ‘grease’ form, papular lesions, which later become vesicles and then pustules covered with scabs, develop in the skin over the flexor surface of the joints in the lower part of the legs. Now that smallpox vaccination has been abandoned these conditions have become rare. It is possible that ‘grease’ in horses was the original source of vaccinia virus since all of the more recent cases of ‘grease’ have not had demonstrable contact with vaccinated humans.5 Further evidence of a horsepox- related virus being used in an early American smallpox vaccine was provided by genome sequencing.14 A condition resembling the buccal form was reported in 1986 in a donkey. Vaccinia virus infection in a horse with severe cutaneous disease2, 4 and serological evidence of orthopoxvirus infections in horses have been reported in Brazil.1

Poxviruses have also  been demonstrated in mild skin lesions of horses resembling those of Molluscum contagiosum.3, 9, 12, 16 In Africa, a verrucous or papillomatous type of horsepox called ‘Uasin Gishu disease’ has been known for many years. The name was coined because it was first observed in horses on the Uasin Gishu Plateau of East Africa, but it has not been studied in any detail. It has also occurred in Zambia and Zaire. The virus(es) causing these conditions in horses and their interrelationships have not been accurately determined. These poxviruses do not cause economically important diseases but they are of interest in comparative studies with true Molluscum contagiosum of humans and a similar disease that has been reported in chimpanzees and kangaroos.12

Virus strains isolated from horses with ‘Uasin Gishu disease’ are antigenically related to vaccinia and cowpox viruses and can be cultivated in cell cultures of bovine origin and on the chorio-allantoic membrane of embryonated hens’ eggs. These viruses are also pathogenic for baby mice and chicks and sensitive to chloroform, but are resistant to ether treatment.7 Negatively- stained preparations show viral particles that are morphologically similar to orthopox viruses, and ultra-thin sections from skin biopsies reveal masses of pox virions in the cytoplasm of affected cells.8

Mature virions, with a typical pox virus morphology measuring 300 × 200 × 100 nm, and a biconcave nucleoid and two lateral bodies (see General Introduction: Poxviridae, Lumpy skin disease Figure 2 and Figure 1) are found in the cytoplasm of keratinocytes in the stratum spinosum and stratum granulosum in cases of Molluscum contagiasum of horses.12

In contrast to ‘Uasin Gishu disease’ virus, that of Molluscum contagiosum does not grow in cell culture.9, 16 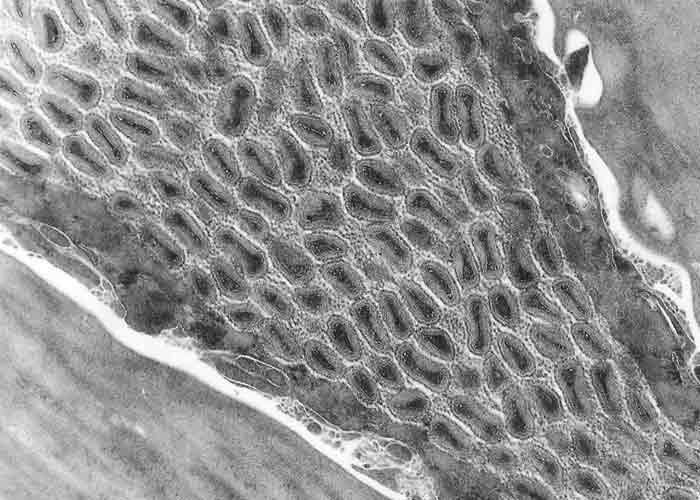 Little is known about the epidemiology of infections causing horsepox. Transmission probably occurs by direct contact but the role of biting insects is unknown. Since horsepox virus is probably extinct, it is likely that it did not have as broad a host range as cowpox virus, preventing the establishment of an animal reservoir to maintain the horsepox virus.

In the majority of cases of ‘Uasin Gishu disease’, varying numbers of lesions are found on the neck, back, flank and hindquarters, as well as the chest, the medial aspects of the thighs and on the abdomen. Lesions in different stages of development may be present and sometimes appear intermittently for several months. Early lesions are marked by firm, small nodules covered by tufts of hair that in turn are covered by a powdery-white, scab-like material, which can be detached leaving bleeding patches. When affected parts lose hair, the raised skin lesions resemble papillomas up to 20mm in diameter and may become confluent in severe cases. Histopathological examination of skin lesions of Uasin Gishu disease cases displayed swelling of the keratinocytes in the stratum spinosum and hair follicles and intracytoplasmic inclusion bodies.6

Molluscum contagiosum of horses is characterized by the formation of small papules, particularly on the muzzle below the nares and on the cutaneous surface of the prepuce, but they may also occur on the neck.12 The papules are 2 to 3mm in diameter and dome-shaped, with a smooth hypopigmented or, in some cases, a slightly...