The phylum Arthropoda (which means ‘jointed legs’) is regarded as the most successful of all animal phyla, and are represented in all habitats of the biosphere. Their diversity and success are associated with their hard cuticle and jointed legs. The class Arachnida (sometimes referred to as subphylum Chelicerata or the chelicerates) – the spiders, scorpions, ticks and mites – is one of five classes of Arthropoda. Others are insects, crustaceans (crabs, lobsters, and shrimps), millipedes, and centipedes. Ticks and mites (order Acari, Acarina, or the acarines) comprise a large group of parasitic arthropods. All ticks are blood-feeding ectoparasites of mammals, birds and reptiles. They can generally be differentiated from mites by: the presence of an exposed toothed hypostome – a tube armed with teeth or denticles which penetrates the skin of a host (Figures 1 & 2); the presence of the sensory Haller’s organ on the first tarsus (Figures 3 & 4); and being larger in size than the typically microscopic mites. Ticks (Acarina: Ixodoidea), or ixodids, constitute three main families: the hard ticks (Ixodidae) containing 683 species, the soft ticks (Argasidae) containing 183 species, and the rare Nuttalliellidae, comprising one genus and one species.

Ticks have been recognised as agents and vectors of diseases affecting livestock and wildlife. The pathogenesis of these diseases can manifest in several ways:

The life cycle of ticks involves four stages: eggs, larvae, nymphs and adults. There are two stages in the life cycle – the non-parasitic or off-host stage which includes development, moulting, questing or hibernating, and the parasitic cycle which involves feeding. The parasitic stage is short, requiring from less than an hour to just more than 10 days. The off-host stage can be as long as 3-5 years in the case of some soft ticks. The ixodids or hard ticks have only one nymphal instar, while argasids (soft ticks) may have as many as five. Ticks take a blood meal and then copulate on the host in ixodids, or off-host in the argasids. The engorged female drops to the ground and deposits eggs in soil or suitable protected humus. Six-legged larvae hatch from batches of 100–20,000 eggs. After a few days during which the integument hardens, they climb onto grass stalks where they quest for passing hosts. Larvae feed, engorge, drop and then moult into 8-legged nymphs. If feeding and moulting of the three instars occurs on the same host, the tick is referred to as a one-host tick (e.g. Boophilus). If the larvae feed, moult to nymphs, continue feeding on the same host and then drop when engorged – these are two-host ticks (e.g. Rhipicephalus evertsi). Most ixodids undergo a three-host life cycle wherein each stage feeds on a separate host. Argasids have different life cycles; their short-interval feeding and multiple nymphal stages require multiple blood meals, and so they are classified as multi-host ticks. The larvae of some argasid species, e.g. Ornithodoros, do not feed, but moult directly into nymphs. Larvae which feed do so for many days – similar to hard ticks. The adults of Otobius megnini do not feed. Adults of all other argasid species feed intermittently and for short periods (minutes), several times in their life time, and the females lay small batches of eggs after each blood meal. Unlike hard ticks, soft ticks copulate off their hosts. The use of a series of hosts by tick instars facilitates the transmission of pathogens. 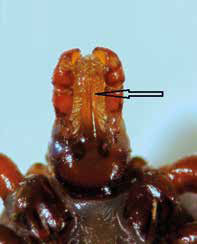 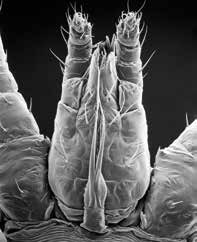 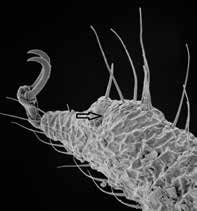 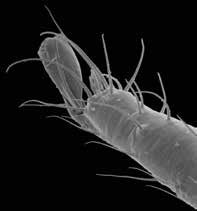 Taxonomy is the study of the principles of scientific classification, ordering, and the naming of species. It is the foundation upon which all research on biology, ecology, epidemiology, and molecular studies related to any species, is grounded. Tick identification is based on the detailed description of the external morphological features. It is usually based on descriptive illustrations and line drawings of characteristic features. However, some beginners find it very difficult to relate line drawings to the characteristics in the live tick. On the other hand, photographs and photomicrographs obtained using stereomicroscopy and scanning electron microscopy respectively – can be much more helpful for identification purposes. Such tick images become reference materials in museums.

Accurate identification of ticks to species level is the basis of: