Leptospirosis in livestock is caused by spirochaetes of the genus Leptospira and is characterised by fever, renal and hepatic failure and reproductive failure.2 In equids, leptospirosis may manifest as recurrent uveitis associated with an autoimmune response.122 Infection in livestock also may result in chronic renal infection and urinary shedding that persists for months to years following initial infection. Contact with livestock is an important risk factor for human leptospirosis,2, 144 a widespread but neglected zoonotic disease that is estimated to affect more than one million people and result in around 59 000 deaths worldwide each year.35

Leptospirosis was first recognized in humans in 1886 by Weil,194 who described it as an infectious disease characterized by icterus. The responsible organism was simultaneously isolated and reported in 1916 by two independent groups of researchers,105, 184 and shortly afterwards rats were shown to be a host of infection.104 Leptospira spp. are difficult organisms to culture, which presents challenges for the diagnosis of infection and has limited research into human and animal disease. However, the advent of molecular typing and, more recently, whole genome sequencing, has improved our knowledge of Leptospira taxonomy, virulence and transmission.

Leptospira spp. bacteria belong to the family Leptospiraceae. Leptospira spp. are thin (0.15µm), right-handed helical, motile organisms that are 10-20µm long with distinctive hooked ends.152 They are Gram-negative organisms with an inner membrane and peptidoglycan cell wall overlain by an outer membrane containing lipopolysaccharides (LPS).152 Leptospira LPS are structurally and immunologically similar to LPS from other Gram-negative organisms although they do not appear to exhibit the same endotoxicity.2, 3

Dark-field microscopy is used to visualise Leptospira, which aredifficult to visualise with conventional microscopy because they are so thin. Leptospira exhibit rapid darting movements in liquid media with flexing motions and rotation about their long axes.3 The characteristic motility of Leptospira is due to a periplasmic endoflagellum with polar insertions, which is unique to spirochaete bacteria.152 The motility of Leptospira allows them to move in viscous environments, which enables them to penetrate blood vessels and rapidly reach target organs through haematogenous dissemination.152

Based on genetic typing, 22 species of Leptospira have been identified, which are divided into three distinct phylogenetic clades (Figure 1).152 The genus comprises a clade of 10 pathogenic Leptospira species that have been associated with disease in humans and animals; a clade of five species with ‘intermediate’ pathogenicity traits that have been associated with mild clinical manifestations; and six saprophytic Leptospira species, which do not cause disease. Within the pathogenic Leptospira clade, four subgroups197 have been identified that are thought to correlate to the degree of virulence in humans.152 Subgroup I contains three species (L. interrogans, L. kirschneri, L. noguchii) that are most often associated with severe manifestations of leptospirosis. Subgroup II contains five species (L. borgpetersenii, L. mayottensis, L. santarosai, L. alexanderi, L. weilii) that are typically associated with milder disease and that show evidence of co-evolution with particular animal host species.152 Subgroups III and IV are represented by only one species each (L. alstoni and L. kmetyi respectively) and the virulence of these species remains unclear. 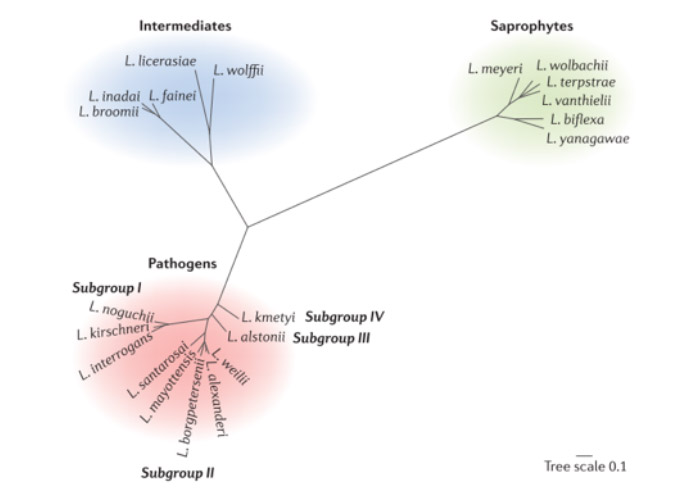 The smallest taxonomic unit of Leptospira is the serovar and more than 250 distinct serovars have been described to date. Nomenclature for Leptospira serovars has changed over the years but now follows a format agreed by the Committee on the Taxonomy of Leptospira in 2002, where the genus and species are stated and italicised followed by the serovar name, which is capitalised but not italicised (for example; Leptospira interrogans serovar Icterohaemorrhagiae) (http://www.leptosociety.org/resources). This nomenclature is also useful as it reflects both the phylogenetic and serological classifications of each serovar. Although the serogroup is not strictly included in serovar nomenclature, it is commonly stated in parentheses after the serovar name (e.g. L. interrogans serovar Copenhagenii (serogroup Icterohaemorrhagiae)).

Identifying new Leptospira serovars is a complicated and time-consuming process requiring specialist facilities.152 Cross-agglutination absorption tests and monoclonal and polyclonal agglutination testing are used to characterise serovars based on their serological profile, determined by structural heterogeneity in the carbohydrate component of the LPS.21, 88, 122 Related serovars are grouped into...