Neospora caninum is a relatively recently recognized protozoan parasite that occurs in a wide range of animals species. Until 1988 it was misdiagnosed as Toxoplasma gondii because of structural and biological similarities.52 The disease was first described in dogs by Bjerkås et al.25 in Norway in 1984 but the parasite was not named at that time. Dubey and his co-workers in 198852 described the parasite and proposed a new genus, Neospora, with N. caninum as the type species. In vitro isolation of the parasite in cell culture inoculated with tissues of paralysed dogs contributed to a better understanding of its biology.57 In 1988, neosporosis was recognized as a cause of abortion in cattle163 and in the subsequent three years infections were induced experimentally in most species of livestock.63 The genome of N. caninum was sequenced in 2012,146 suggesting that N. caninum and T. gondii diverged from their common ancestor approximately 28 million years ago. A book authored by Dubey58 devoted solely to neosporosis listed more than 2000 references: much of the information in this chapter is extracted from that book and only selected references are cited here.58

Only an asexual cycle occurs in the intermediate hosts that consists of tachyzoites and tissue cysts. Both tachyzoites and tissue cysts are microscopic in size and intracellular. Tachyzoites are ovoid, lunate or globular and measure 3–7 μm × 1–5 μm, depending on the stage of division (Figures 2 and 3). Tachyzoites are found in the cytoplasm in many cells including neurons, macrophages, fibroblasts, vascular endothelial cells, myocytes, hepatocytes and dermal cells. Tachyzoites are usually located in a parasitophorous vacuole in the host cell. Ultrastructurally,  the tachyzoites of N. caninum resembles the tachyzoites of T. gondii  except that the rhoptries in N. caninum are electron-dense and more numerous, with some extending the entire length of the parasite, whereas in T. gondii, they are electron-lucent, few, and located anterior to the nucleus.58 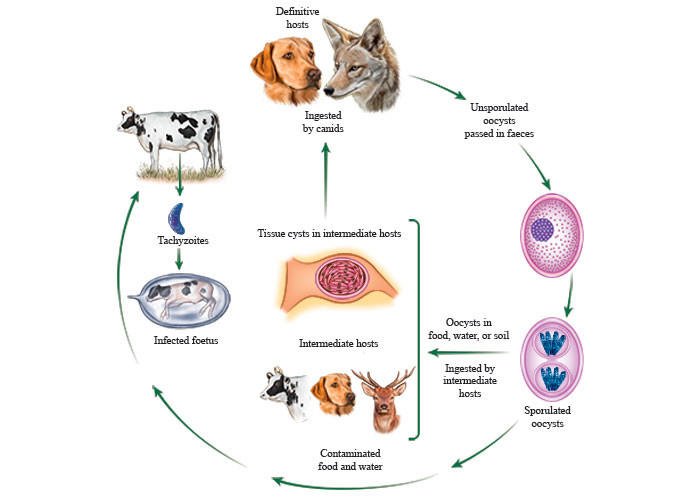 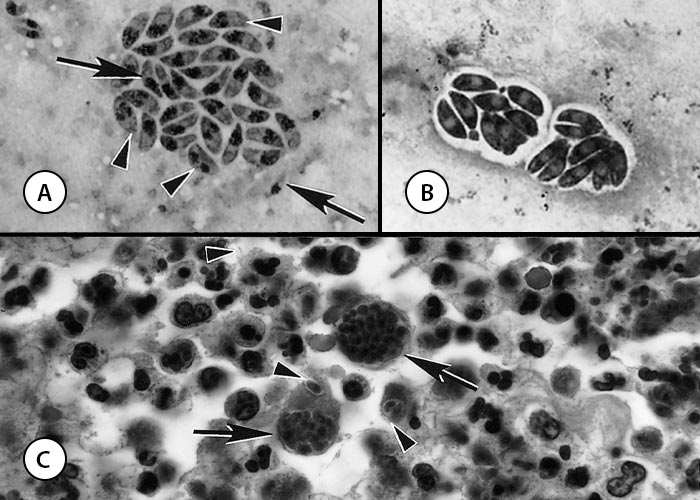 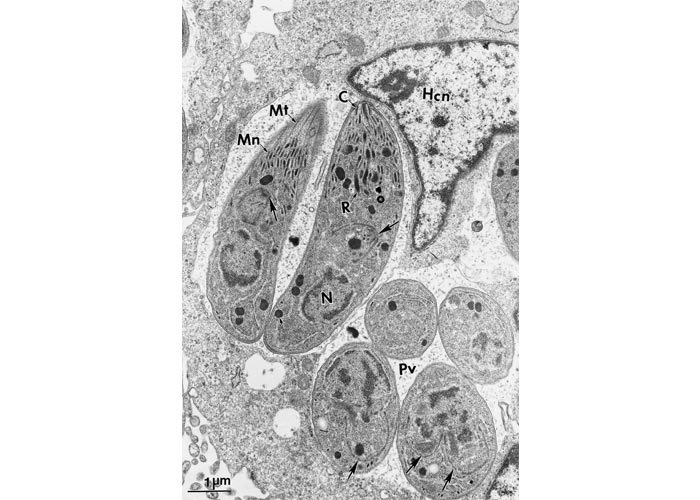 Tissue cysts are often round to oval in shape (Figure 4). Most tissue cysts studied were from the brain and spinal cord, the majority from naturally infected dogs. Tissue cysts in the brain are round to oval and up to 107 µm in diameter. The cyst wall is 0.5 to 4.0 µm thick, both in live, unstained preparations and in histological sections.51 The cysts in myocytes are elongated and may be up to 100 µm long, and have a thin cyst wall.71, 141 Histologically tissue cysts are rare in other organs or tissues of naturally infected animals. The tissue cyst wall is smooth and up to 4 µm thick, presumably depending on the duration of the infection. Septa are absent in the cysts and there is no secondary cyst wall (Figure 5). The tissue cyst wall is elastic, argyrophilic, has a wavy contour, and stains negative with Periodic-acid Schiff (PAS). Bradyzoites are slender and contain the same organelles as tachyzoites except that there are fewer rhoptries and more PAS-positive (amylopectin) granules in the bradyzoites. Tissue cysts may degenerate and cause an inflammatory reaction by the host (