Viruses in the family Paramyxoviridae have been associated with emerging diseases in a variety of species, including humans, in several countries. However, there have been few viruses from this family which cause disease in pigs. In 1997, a paramyxovirus, named Menangle virus, was identified in pigs in Australia10 in association with severe reproductive loss and the delivery of mummified foetuses and stillborn piglets, some with malformations.

The paramyxoviruses are typically large (150 to 350 nm), pleomorphic enveloped RNA viruses with an outer fringe of ‘spikes’ protruding from the envelope. Contained within the enveloped virion is a long helically symmetrical nucleocapsid which has a herringbone pattern when examined by transmission electron microscopy. The envelope protrusions consist of attachment and fusion proteins which have both neuraminidase and haemagglutinin activity in some viruses, or only haemagglutinin activity in others. Characterization studies of Menangle virus indicate that it is a member of the genus Rubulavirus.4

Transmission electron microscopic examination shows that it has spherical to pleomorphic particles 30 nm to over 300 nm long, containing herringbone-patterned nucleocapsids with a diameter of 19±4 nm and a pitch of 5.8±0.4 nm, surrounded by an envelope with a single fringe of surface projections 17±4 nm long (Figure 1). Menangle virus grows in a wide range of cell types from many species, including cells of porcine and human origin, and induces pronounced cytopathic effects in cell culture such as vacuolation of cells and the formation of syncytia. It is non-haemadsorbing and non-haemagglutinating using erythrocytes from several species, including humans and birds.

The mechanism of spread of Menangle virus has not been established although respiratory and spread through infected faeces and urine are considered to be most likely ways of transmission. Experimental transmission studies showed that virus is shed in both faeces and urine, with virus being detected for longer periods in urine.3 Studies of archival and newly collected sera indicate that, like other members of the family, the virus is highly contagious and infection spreads rapidly from pig to pig in a fully susceptible population.7 Six months after the estimated time of entry of the virus into the affected piggery, it was found that a high proportion (>90 per cent) of sera collected from pigs of all age categories (n = 88) contained high virus neutralizing antibody titres (≥256). In contrast, all samples (n = 120) collected prior to the estimated time of entry of the virus into the pig population tested negative. All serum samples (n = 50) collected at two other piggeries that had received only weaned pigs from the affected piggery were positive. Positive virus neutralizing antibody titres ranged from 16 to 4096. Testing of sera (n = 1114) from pigs in other piggeries throughout Australia, including piggeries with reproductive problems, indicated that the infection was confined to the affected piggery and the two associated piggeries. 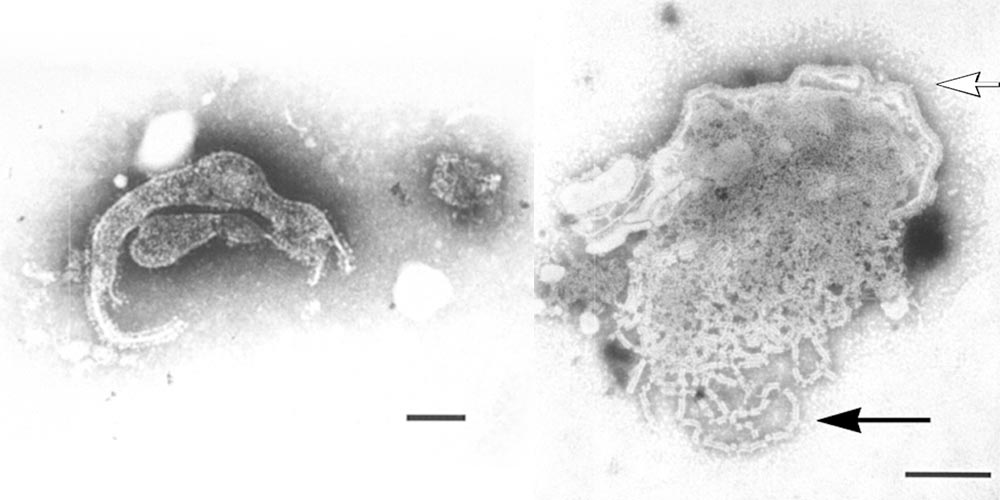 Following the initial rapid spread of the infection through the majority of the susceptible pig population, the virus was maintained in the herd by cyclic infection in groups of young pigs as they lost their maternally derived antibody protection between 12 and 16 weeks of age. Almost all selected replacement breeding pigs were seropositive before mating at 28 weeks of age.

It appears that close contact between pigs is required for spread of infection and that the virus does not survive in the environment for any length of time. Susceptible pigs, moved into an uncleaned area that had been vacated by infected pigs three days previously, did not become infected.

Virus is only detected in pigs for 10 to 14 days3 and results in strong immunity. There is no evidence of persistent infections or of carrier pigs.

During the first outbreak of the disease there was a large breeding colony of grey-headed fruit bats (Pteropus poliocephalus) (Figure 2) as well as little red fruit bats (Pteropus scapulatus) roosting within 200 mertres of the affected piggery during the late spring to autumn months, the period when the virus was thought to have entered...