Peste des petits ruminants (PPR) is a disease of goats, sheep, and taxonomically related species caused by a morbillivirus in the family Paramyxoviridae.47, 48, 51, 58 It is clinically and pathologically similar to rinderpest, and is the most economically important viral disease of small ruminants in the areas where it occurs.

The disease was first described in 1942 by Gargadennec and Lalanne45 when they investigated a previously unreported syndrome in sheep and goats in Côte d’Ivoire. Because of its clinical and pathological resemblance to rinderpest (RP) or peste bovine in French, they called the disease ‘peste des petits ruminants’ (PPR). It was soon recognized in other French West African colonies such as Dahomey (now Benin) and Senegal.28, 77 More than a decade later, workers in Nigeria studied a syndrome that occurred primarily in goats and was variously named stomatitis-pneumoenteritis- complex, pseudo-rinderpest, or ‘kata’.97, 116 It was initially considered to be distinct from PPR because of its predominance in goats, as opposed to sheep, as reported in the earlier French descriptions, and because of the crusty labial lesions commonly found in convalescent cases. Further investigations, however, clearly showed that the two diseases were indistinguishable,51, 56, 96, 98 and the disease is now universally referred to by its original French name.

In Africa today, PPR is widespread in the sub-Saharan and Sahelian zones and has been confirmed in Sudan42 and Ethiopia.91 There is no clinical evidence that PPR exists south of a line from Cameroon to Ethiopia, and only limited serological evidence for infection in adjacent zones of Uganda and Kenya.114 The virus and its disease are also widespread in Asia, having been reported in epidemic form affecting both sheep and goats in India, Iran, Israel, Pakistan, Turkey and much of the Arabian peninsula.3, 9, 14, 16, 44, 52, 62, 78, 89, 105 Serological evidence indicates its presence in Jordan65 (Figure 50.1). The chronological sequence of new reports of PPR gives the impression that the disease has spread steadily eastwards from its origin in West Africa. Molecular evidence, however, shows that non-African isolates are quite distinct from African isolates,112 and it seems probable that PPR was overlooked in areas where rinderpest and contagious caprine pleuropneumonia were or are common.

Similarly, although rinderpest virus (RPV) can infect sheep and goats in Africa, most experimental studies have induced only mild or subclinical infection.90, 102 It is therefore possible that some early descriptions of severe rinderpest in small ruminants were actually PPR.17, 57 El Hag Ali and Taylor42 used specific antisera and transmission studies to confirm that virus isolates originally considered to be RPV from goats were actually the first isolates of peste des petits ruminants virus (PPRV) in eastern Africa.

Several early studies showed the close relationship between PPR and RP viruses48, 76, 116 and for a time PPRV was considered to be a host-adapted variant of RPV. Field observation, however, showed that the disease is independent of RP and cattle, and serology has indicated that the immunological relationship between the two viruses is as distant as that between RPV and the other morbilliviruses (including measles and canine distemper).47, 48, 107, 121 Studies with monoclonal antibodies and nucleic acid techniques confirmed the distinction between the two viruses, and that PPRV is a completely separate pathogen.32, 33, 74 It has been proposed that RPV is the direct descendent of an ancestral morbillivirus from which the others evolved, and that PPRV diverged from RPV more recently than did measles and canine distemper viruses.74 If PPR originated in West Africa in 1942, the virus must have evolved either after the 1887 to 1896 RP pandemic or from strains of RP already established in Africa long before the infamous pandemic. Since neither option seems likely, an alternative might be that PPR originated in Asia and was independently introduced into Africa much as RP was introduced through infected livestock. Nucleic acid sequencing data, however, clearly distinguishes African PPRV isolates from those outside Africa,112 and it has been suggested that PPR may have evolved from the adaptation of RPV to small ruminants on at least two separate occasions, in Africa and Asia respectively. More needs to be known about the genomic variability of the morbilliviruses before such speculation can be accepted as fact. Currently at least four main genetic lineages of PPRV are distinguishable by nucleic acid sequencing (Figure 50.2). 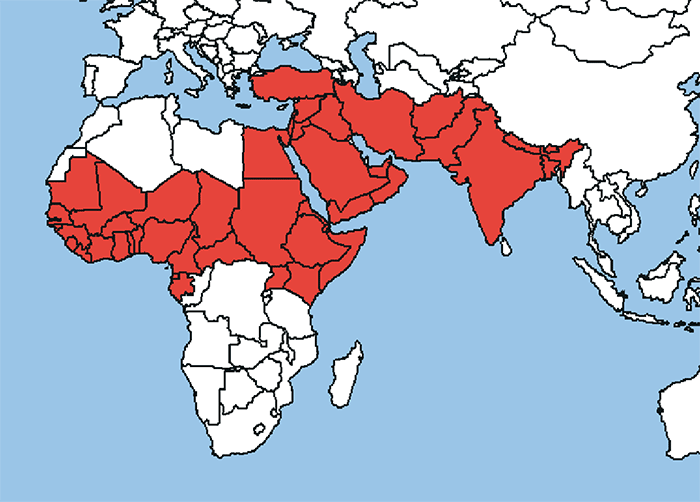 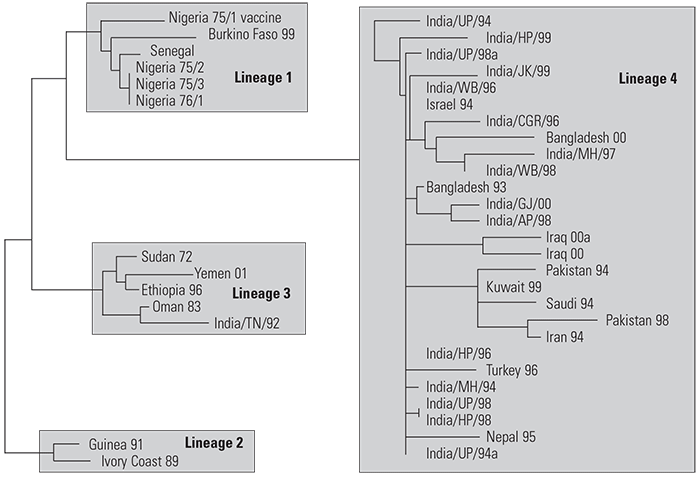 The virus can be isolated in vitro in primary sheep and goat kidney and Vero cells, and, once isolated, it also grows readily in some bovine kidney cell lines.42, 48, 63, 93, 111 The physico-chemical characteristics, morphology and cytopathic effects produced by PPRV are similar to those of RPV, although intranuclear inclusion bodies are more common. 22, 40, 47, 51

The N polypeptide of PPRV has a molecular weight more like those of measles and canine...