The association between infection with PPV and porcine infertility was first demonstrated in 1967,13 although the virus had previously been identified in stocks of classical swine fever (hog cholera) virus grown in cell culture.43 Subsequent investigation showed that PPV is widespread in all pig populations but that it is non-pathogenic in pigs infected after birth. In pregnant animals, however, the virus is able to cross the placental barrier and infect embryos and foetuses. In foetuses younger than approximately 60 to 70 days of gestation, infection is usually fatal. The ability of older foetuses to withstand infection appears to be associated with the onset of immunological competence.

Porcine parvovirus has been identified as one of the most important causes of the porcine SMEDI (S = stillbirth, M = mummification, ED = embryonic death, I = infertility) syndrome, which may be reflected as variation in litter size.21, 27, 61, 62 The prevalence of reproductive losses due to PPV has greatly declined during the last decade, probably owing to routine vaccination of herds.

This is reflected in the number of papers on PPV presented at the biennial International Pig Veterinary Society congresses between 1976 and 2000 (Figures 73.1),23 the proceedings of which are a strong indication of the most important diseases constraining pig production at a given time. Porcine reproductive and respiratory syndrome (PRRS) (see Porcine reproductive and respiratory syndrome) which emerged almost simultaneously in Europe, the USA, and Asia in the 1980s, has superseded PPV as the most important cause of breeding losses in the major pig-producing countries of the world. Nevertheless, when PPV enters a fully susceptible breeding herd it can have a devastating effect.9, 22, 70 It has periodically caused reproductive failuren in pigs in southern Africa.83, 88, 93. 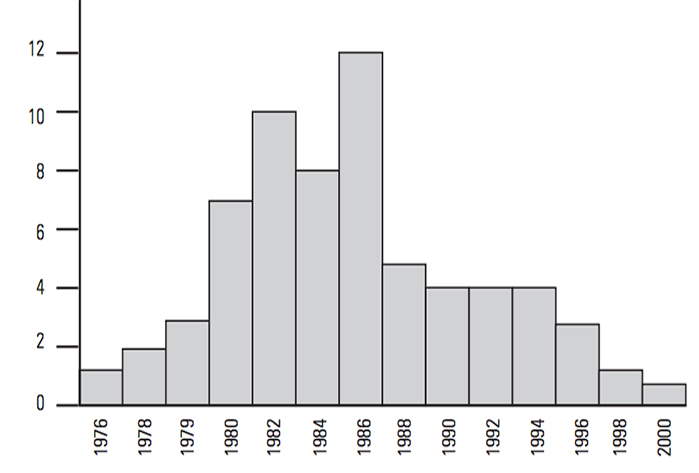 Figure 73.1 Number of papers on porcine parvovirus infection presented at the biennial International Pig Veterinary Society congresses between 1976 and 2000.23 (The data for 1998 and 2000 have been added by the authors)

The genome of PPV, as in other members of this virus family, comprises a single linear strand of DNA made up of approximately 5 000 bases68 with Mr about 1,5 to 1,8 × 106 .82 During viral replication, the single-stranded DNA is converted to a double-stranded replicative form that serves both as a template for viral-messenger RNA synthesis and as an intermediate for the generation of progeny genomic DNA. It has been inferred that single DNA strands with negative (minus) polarity are encapsulated.67 Genomic DNA has terminal hairpin structures at both ends as a result of palindromic (inverted repeat) sequences67, 87, 98 and two open reading frames, the left encoding the structural polypeptides and the right the non-structural polypeptide NS1.87 Complete nucleotide sequences of infectious clones of PPV are available.5, 87, 91, 98

Porcine parvovirus has a predilection for rapidly proliferating cells both in vivo and in vitro and there is a requirement that one or more cellular functions be associated with the late S or early G phase of the cell cycle.82 During replication, viral proteins accumulate and are packaged in the nucleus with the formation of intranuclear inclusion bodies, margination of the chromatin and slight swelling of the nucleoli.2 Staining with haematoxylin and eosin is usually employed to make these changes evident microscopically. In cell cultures the cytopathic effects (CPE) of viral replication develop slowly and are rarely pronounced. They eventually become evident as granulation, rounding and finally lysis of the cells. For this reason, CPE in unstained preparations are difficult to detect or to differentiate from non-specific cell degeneration.

Primary and secondary cultures of pig tissues and organs are susceptible to infection, the most commonly employed being kidney or thyroid cell cultures. Most cell lines of porcine origin have low sensitivity to PPV infection, as is the case of cells derived from animals other than pigs.43, 84 At least three porcine cell lines, two derived from lung tissue and one from kidney, have been shown to be suitable for the...