The protozoan Sarcocystis is ubiquitous worldwide. While most infections are subclinical, a few species can cause acute clinical disease in animals and even death. Some Sarcocystis species are zoonotic.

The coccidial nature of Sarcocystis first became apparent in 1970s from studies by FAYER, 197062 and 197263 in the USA and by Heydorn and Rommel90, 130 in Germany. The classification, history and nomenclature of Sarcocystis have been reviewed elsewhere.35, 51, 105 Much of the information in this chapter is extracted from a recent book on Sarcocystis.35

Unlike its relatives, Toxoplasma and Neospora, Sarcocystis has many species. A recent book, listed 200 named and many unnamed species and more than 2400 references.35 However, full life cycles are known for only a few species.

The protozoan belongs to the phylum Apicomplexa (Sporozoa); class Sporozoasida; subclass Coccidiasina; order Eucoccidiorida; suborder Eimeriorina; family Sarcocystidae;subfamily Sarcocystinae; genus Sarcocystis. This generic name is derived from the cyst stage in muscle (‘sarco’ = muscle, from the Greek word for flesh). Sarcocystis spp. have the organelles that are characteristic of the phylum Apicomplexa such as apical rings (also called conoidal or preconoidal rings), polar rings, conoid, pellicle, subpellicular microtubules, micropores and micronemes. However, unlike other coccidians, Sarcocystis schizonts are located directly in the host cytoplasm and merozoites lack rhoptries.

Many species of Sarcocystis are found in domestic animals (Table 1). A two-host life cycle is involved (Figure 1): the intermediate hosts (herbivores) harbour the asexual stages of the parasite, whereas a sexual cycle takes place in carnivorous definitive hosts (Table 1). The time required for completion of the life cycle varies considerably, depending upon the species of Sarcocystis.35 The life cycle of S. cruzi will serve as an example in this chapter.30

The definitive host of S. cruzi becomes infected by ingesting muscular or neural tissue containing mature sarcocysts. Bradyzoites (cystozoites) are liberated from the ingested sarcocyst in the stomach and gut, and then penetrate the mucosa of the small intestine and transform into male (micro-) and female (macro-) gamonts. Within six hours of ingestion of infected tissue, gamonts are found within a parasitophorous vacuole (PV) in goblet cells near the tips of villi. Macrogamonts are ovoid to round, 10 to 20 μm in diameter, and contain a single nucleus. Microgamonts are ovoid to elongated and contain one or more nuclei. The microgamont’s nucleus divides and, as the microgamont matures, the daughter nuclei migrate towards the periphery of the gamont. Mature microgamonts of S. cruzi measure about 7 × 5 μm and contain 3 to 11 slender gametes. The microgametes are about 4 × 0.5 μm in size and have a compact nucleus and two flagella. Microgametes liberated from the microgamont actively move to the periphery of the macrogamont. After fertilization, a wall develops around the zygote and the oocyst is formed. The entire process of gametogony and fertilization can be completed within 24 hours and gamonts and oocysts may be found at the same time. The location of gametogony and the type of cell parasitized vary with the species of Sarcocystis and stage of gametogenesis. Sarcocystis differs from other coccidia in that no asexual multiplication takes place in the intestine prior to sexual reproduction.

In contrast to other coccidians (see Coccidiosis), Sarcocystis oocysts sporulate in the lamina propria of the gut. The inner mass of the oocyst (sporont) divides into two sporocysts. Four sporozoites are formed in each sporocyst. Sporulated oocysts are generally colourless and thin-walled and break so that free sporocysts are excreted in faeces (Figure 2). The prepatent and patent periods vary (the latter is usually long), but oocysts of most Sarcocystis species first appear in faeces between 7 and 14 days after ingestion of sarcocysts.

Figure 1 Life cycle of Sarcocystis cruzi. Dog, coyote and other canids are its definitive hosts and cattle and the American bison (Bison bison) are the only proven intermediate hosts. 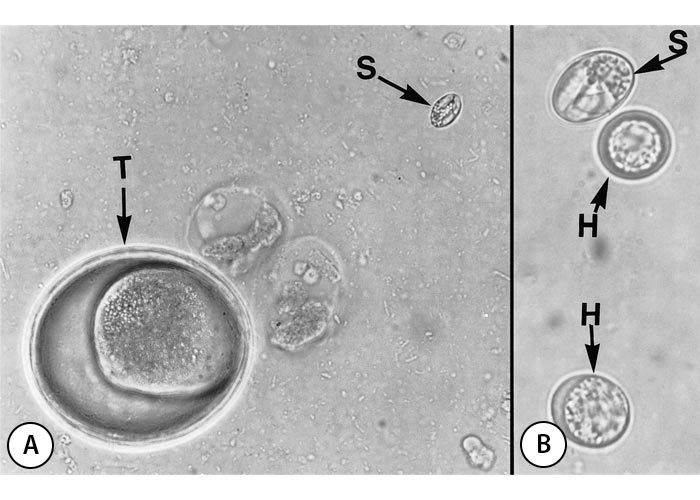 The intermediate host becomes infected by ingesting sporocysts (Figures 2 and 3). Sporozoites excyst from sporocysts in the small intestine. The fate of the sporozoites from the time of ingestion of the sporocysts until initial development...