Suid herpesvirus 2 (SHV-2), also called porcine cytomegalovirus (PCMV), is an ubiquitous virus that may cause foetal or neonatal deaths and has been associated with runting, rhinitis and pneumonia in piglets less than three weeks of age, or rhinitis in growing pigs. With the advent of xenotransplantation there is renewed interest in this virus.

Suid herpesvirus 2 was first identified by Done6 as a cause of cytomegalic cells with characteristic basophilic intranuclear inclusion bodies in the mucosal glands of turbinates of pigs. Restriction of viral replication to pigs, localization of the virus in the nasal mucosa, lachrymal and salivary glands, and occasionally in renal tubular epithelium, as well as ultrastructural studies,8, 28 indicated that this was a cytomegalovirus of the pig similar to those described for some other animal species.20, 22, 30 These viruses usually cause clinically silent infections in healthy adults but often induce severe, generalized infections in young animals. Virus may also cross the placenta. Like other herpesviruses, SHV-2 induces latent infection. A cell-associated viraemia can occur in the presence of circulating antibody.

In herds where good management is applied, and in which the virus is endemic, there may be no clinical signs or economic loss.

Suid herpesvirus 2 is likely to be present in countries whose domestic pig populations are of European or Asian origin.

Suid herpesvirus 2 is a beta herpesvirus, with an 80 to 100 nm icosahedral capsid surrounded by an envelope, making the complete virion 120 to 150 nm in diameter. The 45 to 70 nm core is usually elongated and may be oval, rectangular or dumb-bell shaped.8, 28 So far only the sequences of the DNA polymerase gene have been published,31 supporting its classification as a beta virus. The virus is sensitive to chloroform and ether.2

Watt29 found pulmonary macrophage cultures derived from three- to five-week-old piglets to be the most sensitive system for both primary isolation and propagation of virus. Cytomegaly and intranuclear inclusions develop 11 to 14 days after inoculation (Figure 83.1) and infectivity titres of up to 105,5 TCID50 may occur. This culture system has limitations because of the fastidiousness and variability of the cells, and because of residual adventitious viruses. Primary pig lung cells16 and a cell line derived from porcine Fallopian tube 3 also support viral replication, while it has been reported that 12-O-tetradecanoylphorbol 13-acetate accelerates viral replication in this system.15 Suid herpesvirus 2 appears to be host-specific both in vivo and in vitro.

In cultures, infected cells enlarge by up to six times and their mitochondria, endoplasmic reticulum, and Golgi apparatus swell.8 The large, intranuclear inclusions contain the nuclear capsids, often in crystalline array.27 The capsids acquire an electron-dense coat in the nucleus, the envelope derives from the inner nuclear membrane, and the virions come to lie free inside intracytoplasmic cisternae. 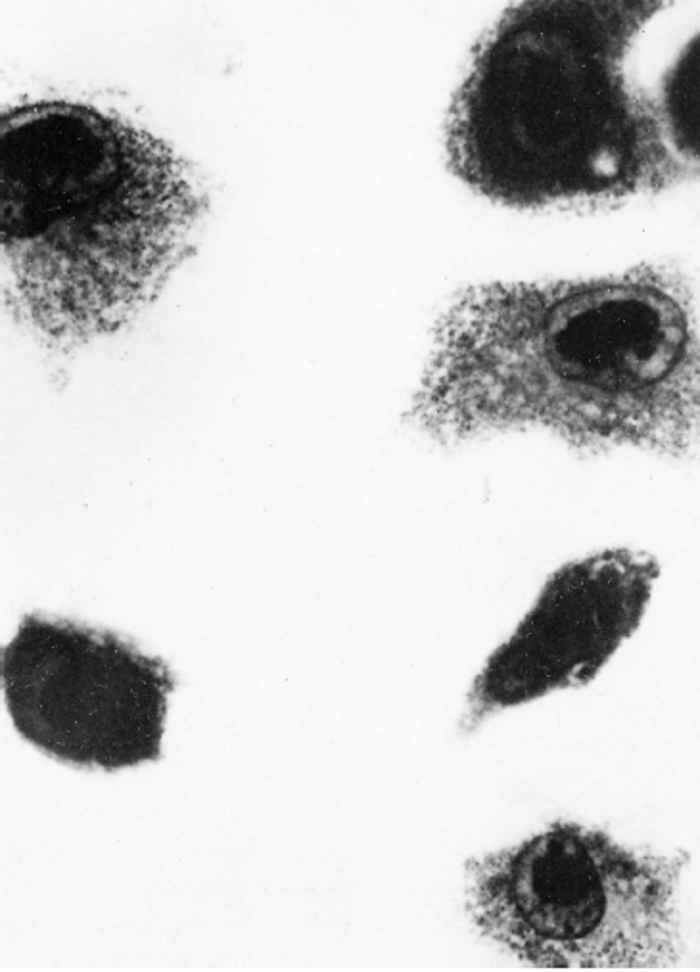 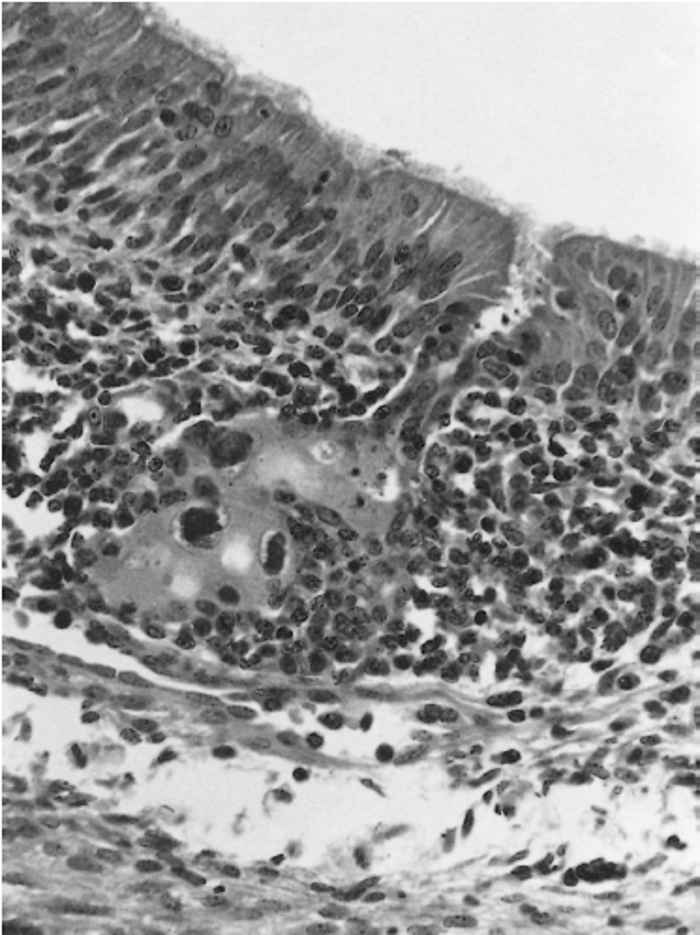 Figure 83.2 Foci of cytomegaly and intranuclear inclusions are most commonly seen in the mucous glands of the turbinate mucosa. A periglandular infiltration of lymphocytes, plasma cells and occasional macrophages is also a prominent feature by 18 days after infection

Suid herpesvirus 2 has been detected wherever it has been sought. In the UK a serological survey indicated that over 95 per cent of herds had been exposed to the virus.19 The ubiquity of the infection and the possibility of transplacental infection indicate that even hysterotomy-derived littersmaybe infected.

In infected neonatal piglets the virus is shed predominantly in nasal secretions, but also in urine and ocular secretions. 11, 19 Levels of passive antibody fall initially during the period of virus excretion, but rise when the piglets are between 8 and 11 weeks old as a result of active production. They continue to increase until at least 23 weeks after infection. Susceptible sows show a similar pattern of excretion but, in addition, shedding of virus from the cervix occurs in some pregnant sows.

Recovery of virus from lung macrophages of apparently healthy pigs suggests that the virus either persists at this site or that it may establish a true latent infection. Infection may be reactivated after administration of corticosteroids.11

In animals older than three weeks, the virus occurs most commonly in the glands of the nasal mucosa but it may also be present in the Harderian and lachrymal glands and in the renal tubules. On rare occasions it is found in the mucous glands of the oesophagus and duodenal epithelium.

In foetuses or neonates, the virus has a predilection for reticuloendothelial cells. Inclusions occur in capillary endothelium, the sinus and sinusoidal cells of lymphoid...