Swinepox is an acute but usually mild disease particularly of young pigs characterized by the development of pox skin lesions.
In the past a similar disease was often caused by the adventitious infection of pigs with vaccinia virus, which was used to vaccinate humans against smallpox. Since the eradication of smallpox and the subsequent suspension of vaccination, swinepox is caused exclusively by a host-specific poxvirus. However, vaccinia- like viruses continue to circulate in Brazil and have the potential to infect pigs.21

A low prevalence of disease occurs in all countries where pigs are raised, although it may be high in individual herds.10, 12, 18, 24

Swinepox virus is very resistant to adverse environmental influences and survives for 12 days at 37 °C. Scabs retain their infectivity for up to one year at room temperature.14, 17

Propagation of swinepox virus is difficult and serial passaging in swine cell cultures is usually necessary before cytopathic effects (intracytoplasmic inclusions one to two days after inoculation, nuclear vacuolation and margination of the chromatin) occur. Destruction of the monolayer occurs five to seven days after inoculation.8 Swinepox virus does not multiply on the chorioallantoic membrane of embryonated hen’s eggs.

Pigs are the only animal susceptible to infection with swinepox virus.10, 16, 25

Transmission of the virus is usually by contact between acutely infected and susceptible animals. Lice (Haematopinus suis) are thought to transmit the disease mechanically and may influence the severity and spread of the disease by damaging the skin.18 Lice may be infectious for weeks or months, but vertical transmission of the virus within the louse population has not been proven. Other biting insects, especially flies, such as Stomoxys spp., may also transmit the virus mechanically.9, 18

Infected animals shed virus in saliva and lachrymal fluid towards the end of the incubation period. Virus is also shed from pox lesions in the later stages of the disease. Scabs and crusts on the animal or in the environment remain infectious for many months.

In older sows, only a few lesions are usually present and these may be overlooked as the animals do not show other clinical signs. Piglets may escape infection in some outbreaks of swinepox as a result of having acquired colostral antibody.2

Recovered pigs have a solid, usually life-long, immunity. A characteristic feature of swinepox is the slow rate at which antibody appears in the circulation. Virus neutralizing and precipitating antibodies are detectable from about Day 20 after infection and titres peak at four to six weeks.16 Cell- mediated immunity is detectable two weeks after infection.

Swinepox in a herd may increase the hazard of failure of classical swine fever (hog cholera) vaccination,4 and it is believed that other diseases (mycoplasmal pneumonia, salmonellosis) are more severe in affected animals.14

Swinepox virus has a particular affinity for cells of the epidermis, and in severe cases epithelial cells of the upper digestive and respiratory tracts may also be affected. The incubation period varies from 4 to 14 days. Initial signs include low-grade fever, anorexia and dullness, after which flat macules appear on the skin, predominantly on the inner aspects of the proximal part of the limbs (Figure 1), ears, snout and ventral abdomen. These reddish areas develop into papules and then into umbilicated pustules. 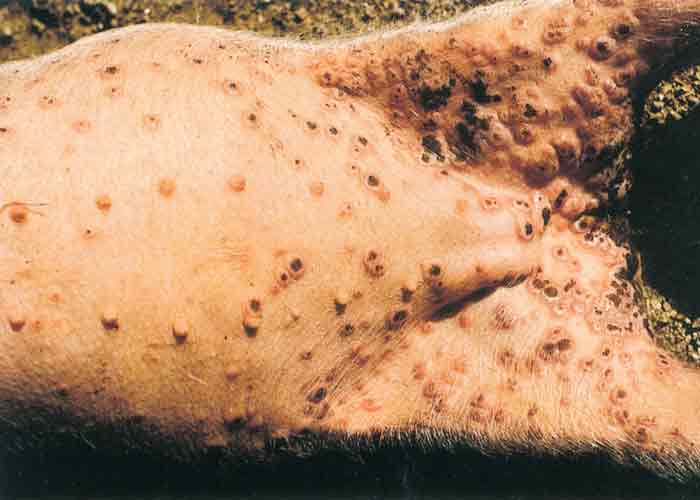 The vesicular stage is usually not seen. After six to eight days the pustules dry and scabs with depressed centres are formed, still surrounded by a raised and inflamed zone. Dark- brown scabs, 10 to 20 mm in diameter, give affected animals a spotted appearance after about 10 to 14 days. Pox lesions develop successively so that not all are at the same stage of development.18 After about three weeks the crusts are shed without leaving a scar. The number of lesions on individual animals varies a great deal and seems to be directly related to the severity of louse infestation.

Sows suckling affected piglets may suffer from teat and udder lesions so that nursing becomes painful, and piglets may even die as a result of starvation. Congenital cases of swinepox have been reported.5

Few pigs die of uncomplicated swinepox but the morbidity rate in individual herds may be high and young animals may have poor...