The skin and adnexa

In southern Africa, there are relatively few non-infectious conditions of plant and fungal origin that affect the skin and adnexa of livestock. The integument can be injured by contact irritants, such as the latex of Euphorbia spp.; systemic intoxications which also involve the skin, as in Vicia poisoning; and mechanical injury by sharp-pointed grass or other seeds. Two toxic plants, Crotalaria burkeana and Chrysocoma ciliata (= C. tenuifolia), although lacking contact irritants or overtly systemic poisons, selectively affect certain components of the skin. For instance, Crotalaria burkeana specifically causes abnormal hoof growth in cattle, and the unidentified toxin of Chrysocoma ciliata in the milk of sheep and goats is responsible for alopecia in newborn lambs and kids.

Please note that the most important plant or mycotoxin-induced dermatitis of stock on the subcontinent, hepatogenous photosensitivity, is dealt with in Liver.

In South Africa, the Afrikaans term stywesiekte, literally translated as stiffsickness, is used to describe diseases in cattle with diverse aetiology. The term has been coined for an aphosphorosis syndrome,22 a viral disease referred to as drie-dae-stywesiekte (three-day-stiffsickness) or ephemeral fever,3, 57 and a condition caused by the plant Crotalaria burkeana, the stywesiektebossie.8, 22, 50, 52, 56

Crotalaria burkeana is a woody, much-branched, perennial herb 300-600 mm tall. A feature of the plant is that all the aerial parts are covered with long hairs (Figure 1). The three, rarely five, foliate leaves are carried on 15-30 mm long leaf-stalks, and the leaflets are linear to lanceolate in shape. The white, occasionally yellow-tinged or mauve, pea-like flowers, veined brown or dark blue, are borne in terminal racemes (Figure 2) during November through to March. The fruits are inflated pods c.40 mm long and 15 mm in diameter (Figure 3), containing brown kidney-shaped seeds.8, 22, 52, 61 The stywesiektebossie most often frequents wooded grassland or open sandy areas and spreads rapidly in old cultivated lands, trampled veld and disturbed soil. 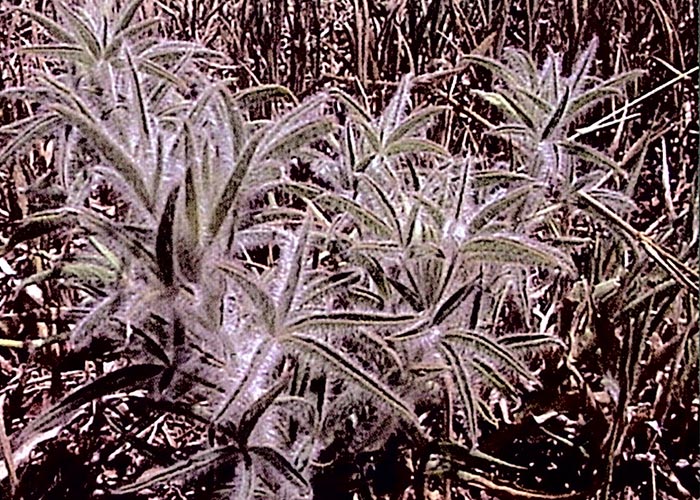 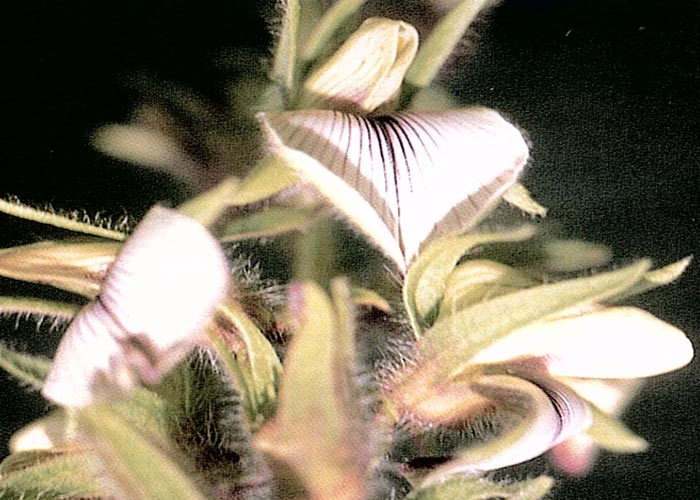 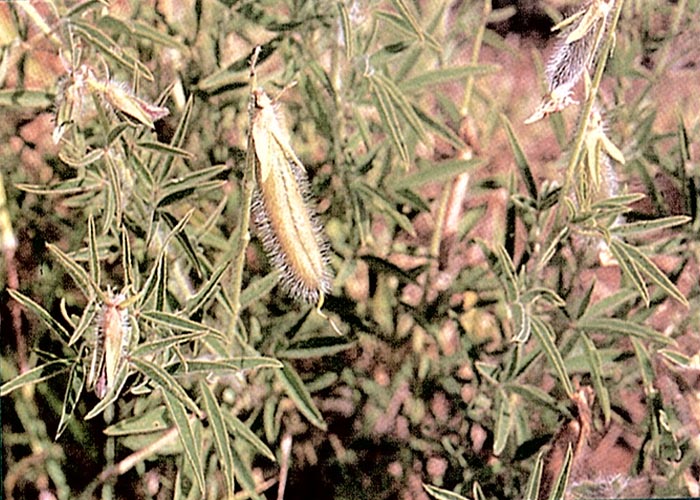 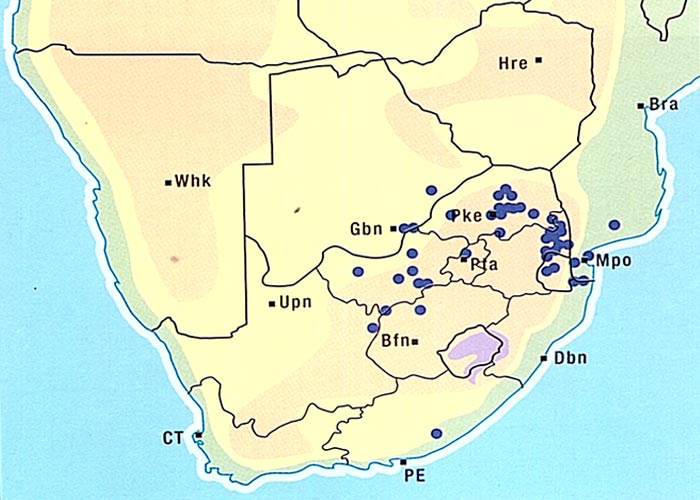 Figure 4 Distribution of Crotalaria burkeana (Courtesy of the NBI, Pretoria)

Steyn52 reported that C. rhodesiae - a soft, slender, prostrate species - causes stywesieke in the Limpopo Province; while in the central and northern parts of Namibia, during bad years, other Crotalaria spp. allegedly give rise to thousands of cases of stywesiekte. Outbreaks of the disease have occurred in the districts of Klerksdorp, Zeerust, Rustenburg, Pietersburg and Barberton.8, 22, 56 Stywesiekte also affects cattle in Zimbabwe, where various Crotalaria spp. inhabit the veld. The disease can take on alarming proportions in certain parts of the former Matabeleland. It is said that in bad years more than half of the cattle in the Inyati Tribal Trust Land may suffer from stywesiekte29 where C. barkae (= C. geminifora) is suspected of being the causal plant. The botanical features and habitat of C. barkae are very similar to those of C. burkeana, the chief difference being that C. barkae is usually an annual or short-lived perennial. Other annual Crotalaria spp. are also suspected of causing stywesiekte in Zimbabwe, e.g. C. steudneri (= C. hispida) which has been found abundantly on the veld where cattle had become affected with the condition.29

No mention is made of liver damage in cattle poisoned by either C. burkeana or C. barkae, Steyn52 on the other hand, reported hepatic involvement, particularly in horses and donkeys, suffering from C. burkeana poisoning. Many affected donkeys in Namibia apparently had to be killed as a result of induration of the liver. Steyn50 also referred to Theiler, who fed 15 kg of dried C. burkeana in 17 days to a horse that developed staggers on the eighteenth day and died two days later, showing what he described as 'acute parenchymatous hepatitis'.

The active principles of the majority of Crotalaria spp. worldwide are the pyrrolizidine alkaloids, which are mainly responsible for severe liver and/or lung damage in stock (see Liver and Respiratory system). The toxin of C. burkeana is not known, but the disease caused by the stywesiektebossie differs markedly from that of hepatotoxic Crotalaria species.

Steyn50 mentions a report by Burtt-Davy (1903/4) describing the signs of stywesiekte in cattle supposedly poisoned by C. burkeana. Later Theiler56 confirmed that this plant was a cause of stywesiekte in cattle. He showed in a feeding trial that daily ingestion of 4-5 kg of fresh plant material resulted in acute laminitis on Day 6. However, this latent period increased with smaller daily intakes of C. burkeana: two cows, fed 1,8 kg fresh plants daily, respectively developed laminitis on the twentieth and twenty-ninth days of...