The protozoan parasite Toxoplasma gondii is a common parasite of many animal species and humans and is distributed throughout the world. Although most of the infections of livestock caused by the parasite are subclinical, toxoplasmosis is a major cause of abortion in sheep in several countries.3, 26, 39, 64, 65, 99 It is also known to cause reproductive losses in goats.29, 44, 54 Cattle are  susceptible to experimental T. gondii-induced abortion100 although abortion has not been reported in natural infections. In southern Africa there is a high prevalence of serologically positive animals,67 but reports of clinical toxoplasmosis in domestic animals are rare.93, 94 Toxoplasmosis has been reported in ferrets7 and chinchillas.19 As toxoplasmosis can affect virtually every warm-blooded animal it is impossible to summarize information for each animal species in this chapter. The disease in animals has been reviewed by.39, 91

Toxoplasma gondii is a coccidian parasite of domestic cats (Nagel et al. 2013)19 and  members of the Felidae, with other warm-blooded animal species, comprising essentially all mammals and birds, as intermediate hosts (Figure 1) It is classified in the phylum Apicomplexa Levine, 1970, class Coccidea Leuckart, 1879, order Eucoccidiorida, and family Sarcocystidae, Poche, 1913. The name Toxoplasma (toxon = arc, plasma = form) is derived from the crescent shape of the tachyzoite stage. There are three infectious stages of T. gondii: the tachyzoites (in groups), the bradyzoites (in tissue cysts), and the sporozoites (in oocysts).39, 58

The tachyzoite is often crescent-shaped and is approximately 2 × 6 μm in size in tissue smears (Figure 2 A) and globular to oval in sections (Figure 2 B). Its anterior (conoidal) end is pointed and its posterior end is round. It has a pellicle (outer covering), a conoid, rhoptries, micronemes, a well-defined nucleus in the central area of the cell (Figure 3) and other organelles found in coccidian merozoites.28, 45

The tachyzoite enters a host cell in a variety of organs and tissues by active penetration of the cell membrane. After entering the cell the tachyzoite becomes surrounded by a parasitophorous vacuole (Figure 3) Numerous intravacuolar tubules connect the parasitophorous vacuolar membrane to the parasite pellicle (Figure 3) The tachyzoite multiplies asexually within the host cell by repeated endodyogeny. Endodyogeny (endo = inside, dyo = two, geny = progeny) is a specialized form of reproduction in which two progeny form within the parent parasite, thereby consuming it (Figure 3) Tachyzoites continue to divide by endodyogeny until the host cell is filled with parasites,45 which is the stage associated with acute toxoplasmosis in animals and humans.

After a few divisions, tachyzoites induce the formation of a cyst wall in a host cell and transform into bradyzoites contained within the wall (Figures 2, 4 and 5). Tissue cysts grow and remain intracellular (Figures 2 and 4) as the bradyzoites (encysted zoites) slowly divide by endodyogeny. Tissue cysts vary in size. Young tissue cysts may be as small as 5 μm in diameter and contain only two to four bradyzoites (Figure 4), while older ones may contain hundreds of crescent-shaped slender organisms (Figures 2 and 5). The tissue cyst wall is elastic, thin (< 0,5 μm) and argyrophilic. Cysts in the brain are round and up to 75 μm in diameter,20  whereas intramuscular cysts are elongated and may be 100 μm long; live tissue cysts in unstained squash preparations vary in size depending on the pressure applied to the coverslip. Although they may develop in visceral organs, including lungs, liver, and kidneys, they are more prevalent in the brain, skeletal muscles and myocardium. Tissue cyst formation can occur as early as one to two weeks after infection and cysts are probably innocuous for their host and can persist for the length of its life. The development of immunity is suspected to contribute significantly to  cyst formation, while immunodeficiency may lead to reactivation into dividing tachyzoites.74 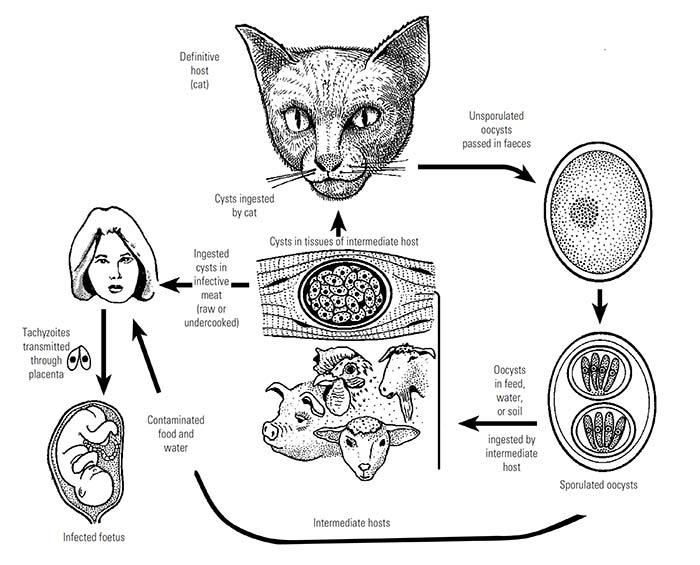 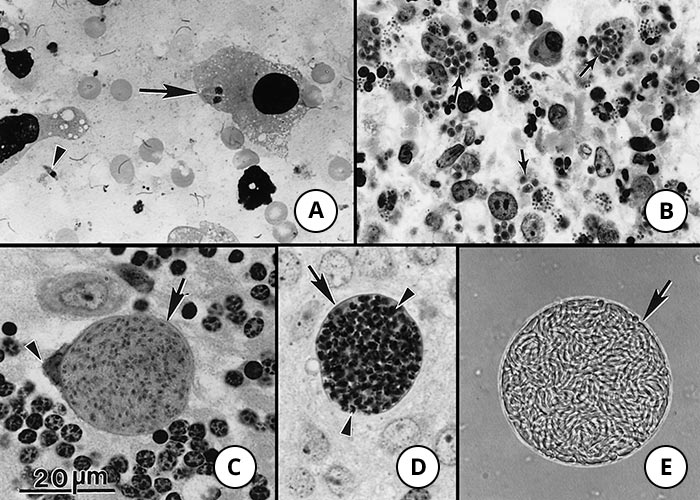 Figure 2 Tachyzoites and tissue cysts of Toxoplasma gondii. Bar = 20 μm and applies to all photographs in the composite figure