Trichomonosis is a venereal disease of cattle associated with aberrant oestrus cycles, infertility, embryonal and foetal death, a low percentage of early abortions, and pyometra.  It is caused by the protozoan, Tritrichomonas foetus, a parasite of the genital tract.

Although self-limiting and often unnoticed, the economic losses associated with trichomonosis can be severe. These are associated with increased intercalving periods due to delayed pregnancies, decreased calving percentage, reduced calf weaning weight, costs of replacement and culling of animals, as well as the cost of treatment.44, 74, 95, 96 Modelling of the economic effects of trichomonosis in a herd has shown that the losses increase exponentially with an increase in prevalence; up to 35 per cent of cow revenue can be lost if confined to a herd with infected bulls and a herd prevalence of trichomonosis of 40 per cent.96 Non-inflation adjusted losses in a dairy herd was estimated at US $665 per cow, more than 30 years ago.44

The geographical distribution of trichomonosis is vast – in fact, it can be considered to occur in all the major cattle-farming regions globally. It has been reported in North,5, 82, 106 Central and South America,29, 123 Europe,73, 76 Africa,32, 60 Asia71, 87 and Australia.19, 20 There is consensus that it can be considered endemic in regions where cattle are raised extensively.129  It can be found in dairy and beef herds alike, although it seems to be more prevalent in beef herds.  The reduced prevalence of trichomonosis in dairy herds can be ascribed to the extensive use of artificial insemination with frozen semen subjected to rigorous biosanitary measures.12, 44, 107

There is some confusion in the literature regarding the first description of T. foetus.  Mazanti is generally credited with the discovery of T. foetus in Italy, in 1900, but according to Morgan,78 it was first identified by Kunstles in France. Honigberg contends that the organism was first discovered in Europe by Riedmüller, who described the organism in 1928 and is recognized as the author of the name T. foetus.54

Tritrichomonas foetus is a commensal of the porcine intestine, stomach and nose,79 but is pathogenic in cats in association with chronic large intestinal involvement and diarrhoea68 and in cattle as parasite of the reproductive tract that causes  infertility.70, 129

The protozoa can occur in a motile, flagellated form or an immobile, rounded form.72 Characteristic features (Figure 1) of the motile parasite (trophozoite form) under phase contrast or darkfield microscopy (Figure 2) are the three anterior flagellae and an undulating membrane.10 The undulating membrane is easily recognised in viable organisms due to its characteristic wave-like motion on one side of the organism, is typically shorter than the body and its external margin is supported by a recurrent flagellum that continues beyond the posterior end as a free posterior flagellum.106  The protozoan is generally pyriform in shape in fresh specimens, but tends to display pleomorphism and a spherical shape in culture. Its size is reported to be slightly smaller than polymorphonuclear cells at 9-25 X 3-15µm and it shows a characteristic jerky or rolling motion in wet preparations.61, 82, 121 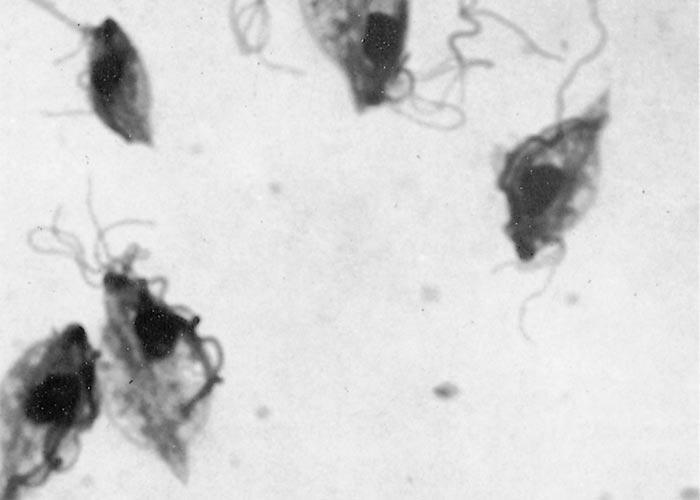 Even though the organism is easy to observe in wet preparations under phase contract microscopy at 100X to 250X magnification, definitive diagnosis should always be pursued by PCR or electron microscopy due to the presence of non-pathogenic trichomonads in preputial cavities of bulls.8, 51

The immotile, rounded form is often termed a pseudocyst, and is associated with unfavourable conditions in the prepuce, in culture or in transport medium.72, 92 The pseudocyst form is not the most common form, but when present in higher numbers, can complicate microscopic diagnosis by obscuring the appearance of characteristic features of the flagellated form.93

Different serotypes64 and genotypes116 are recognized.   Three serotypes were first recognized by Kerr and Robertson,64 namely Brisbane, Belfast and Manley and subsequently confirmed and elaborated on by others.14, 30 The serotypes appear not to be of much significance since heifers immunized with one serotype develop immunity to homologous and heterologous serotypes.9 Tritrichimonas foetus antigens are a highly complex set of proteins, ranging in molecular weight from as small as 25 to 220 kD and consist of 55 to 60 protein bands.48 There is strong antigenic cross-reactivity among diverse T...