J A LAWRENCE AND B J MANS

Turning sickness orbovine cerebral theileriosis (BCT) is an aberrant form of theilerial infection characterized by the accumulation of parasitized lymphoblasts in the cerebral blood vessels leading to thrombosis and infarction (Figures 32.1 to 32.4). The condition has been long known in East Africa, particularly Uganda, and the disease was first described by Mettam (1934) and Mettam and Carmichael8. In East Africa it is usually considered to be caused by Theileria parva, but in South Africa the condition is attributed to Theileria taurotragi, since the disease occur in regions where T. parva is absent.3 The initial hypothesis that it was caused by Theileria mutans5 reflects the confusion surrounding the identity of the Theileria of cattle in southern Africa at the time. Molecular diagnostics have confirmed the presence of T. parva in brain tissue of animals with severe East Coast fever, indicating that schizonts can cross the blood-brain barrier 11, although the animals in the study did not have BCT. Molecular detection of T. taurotragi in the absence of T. parva in brain tissue of animals with BCT in Northern Tanzania (referred to as“Ormilo disease”), confirmed the association of this parasite with the disease 1.  Isolated cased of BCT caused by Theileria annulata have been 2, 6, 12.

Turning sickness occurs sporadically, usually in young cattle less than three years old, in regions which are endemic for T. parva and/or T. taurotragi 1.  A high incidence has been recorded in Zebu cattle which have been immunized by the infection and treatment method for East Coast fever and introduced into an East Coast fever endemic area,10 though a possible confounding effect of co-infection with T. taurotragi cannot be excluded.

Proliferation of schizont-infected lymphoblasts occurs in the blood vessels of the meninges, brain, spinal cord and sometimes the spleen,14 causing thrombosis and infarction. There is usually no evidence of parasite invasion of other organs. This condition is generally considered to result from massive reinfection of a partially immune animal, but the mechanisms which permit the parasite to proliferate in the blood vessels are not understood. It has been suggested that localization of the parasite in the brain may result from intercurrent infection or stress in a chronically infected animal.10

Cases of turning sickness are usually afebrile and characterized by the sudden onset of a variety of nervous signs, including circling, head pressing, uni- or bilateral blindness, ataxia, opisthotonus and paralysis.14 Death usually occurs after 2 to 21 days, but occasional cases become chronic and may live for up to six months. In cases in which the spinal cord is involved there is posterior paresis or paralysis.

In the acute to subacute form, areas of intense congestion and haemorrhage are present in the meninges and the brain, and are associated with localized softening and yellowish discoloration of brain tissue 1, 5. Thrombosed meningeal vessels are often very prominent. There may be extensive haemorrhage into the ventricles (Figure 32.3). Histological examination reveals the obstruction of arteries and arterioles in affected areas with large numbers of parasitized lymphoblasts (Figure 32.5 and 32.6). The blood vessels are frequently thrombosed and necrotic, with perivascular haemorrhage, and the brain parenchyma which they supply shows a spectrum of lesions ranging from malacia, characterized by spongy changes, infiltration of numerous Gitter cells, and proliferation of capillaries and glial cells, to haemorrhage and infarction. Haemosiderin and lipofuscin are widely distributed free or in macrophages through the tissue. In animals which survive for any length of time the necrotic tissue is resorbed, leaving cystic spaces within the brain. Similar esions may occur in the spinal cord 13.  In a few cases infarcts of a 10-20 mm may also be present in the spleen (Figure 32.4).14

Turning sickness may be suspected when an animal in an area endemic for T. parva or T. taurotragi develops the clinical signs and lesions described above. The presence of circulating antibodies specific to one or both parasites provides supportive evidence for the diagnosis.3 The use of molecular diagnostics can confirm the presence of parasites in the brain lesions 1, 7,  11. 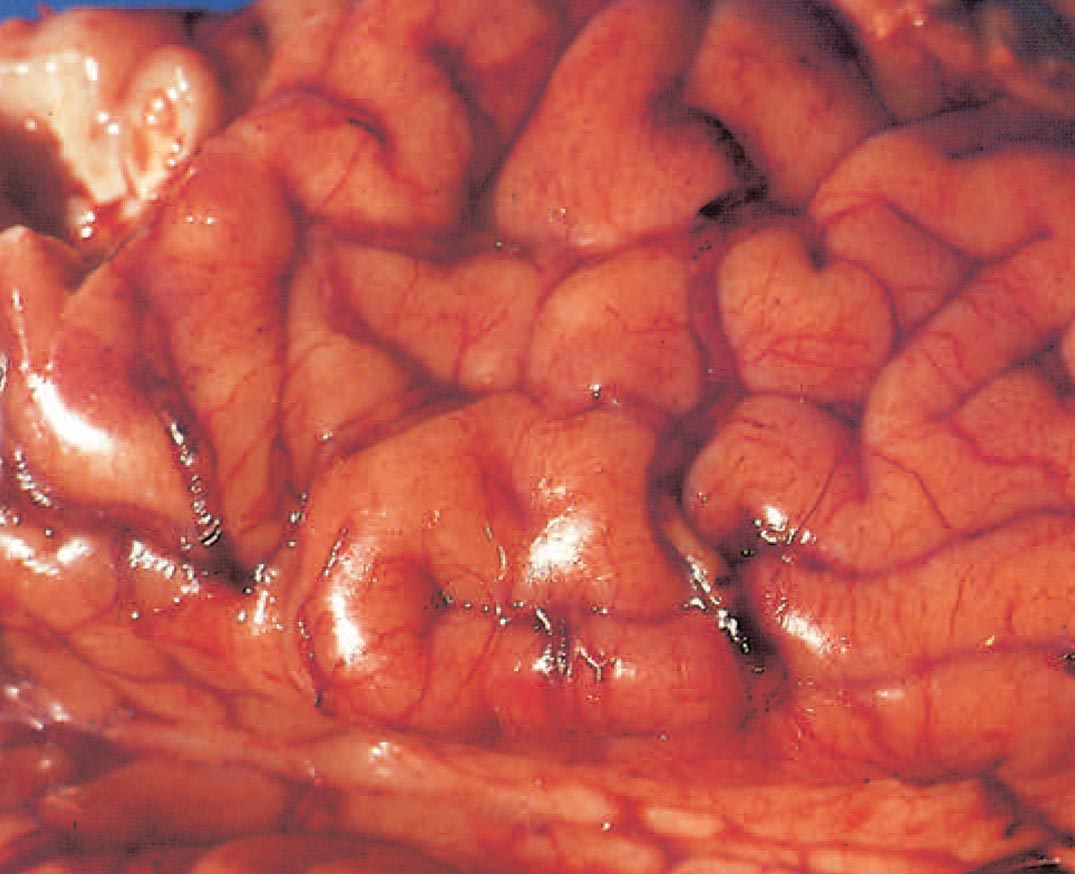 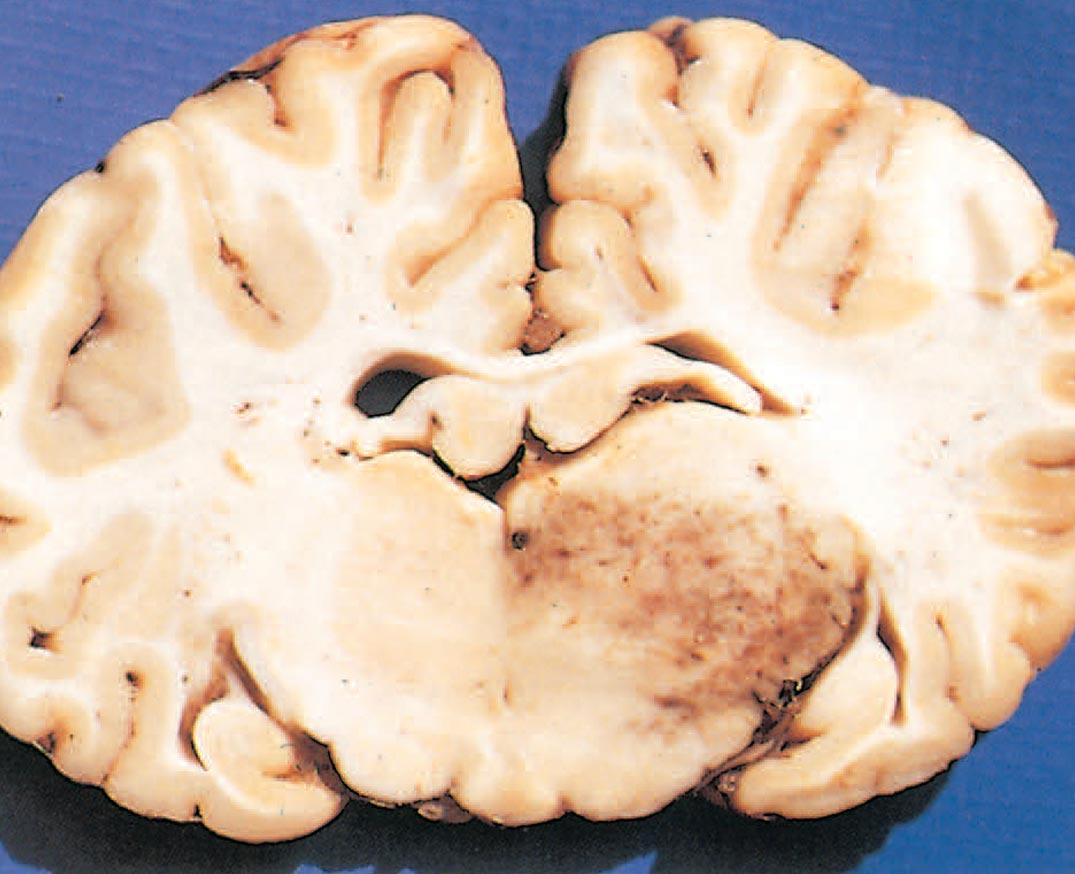 Figure 32.2 Infarct in the thalamus 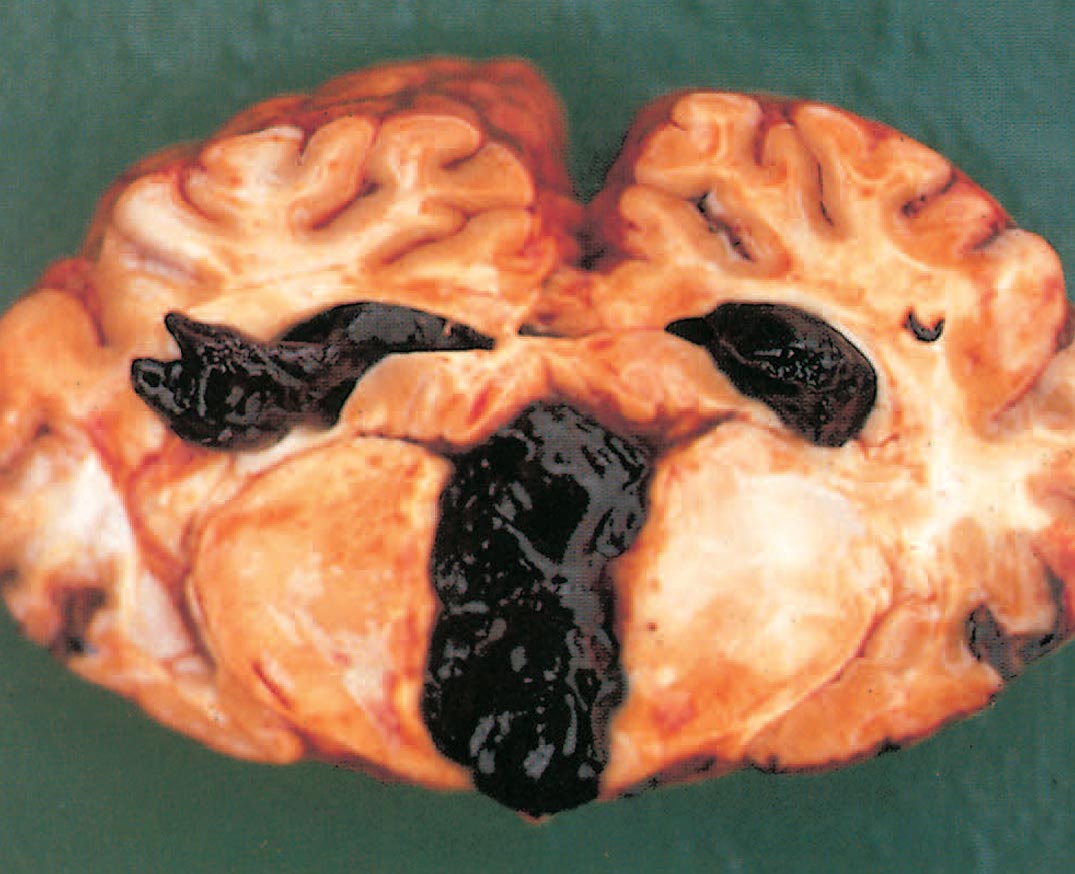 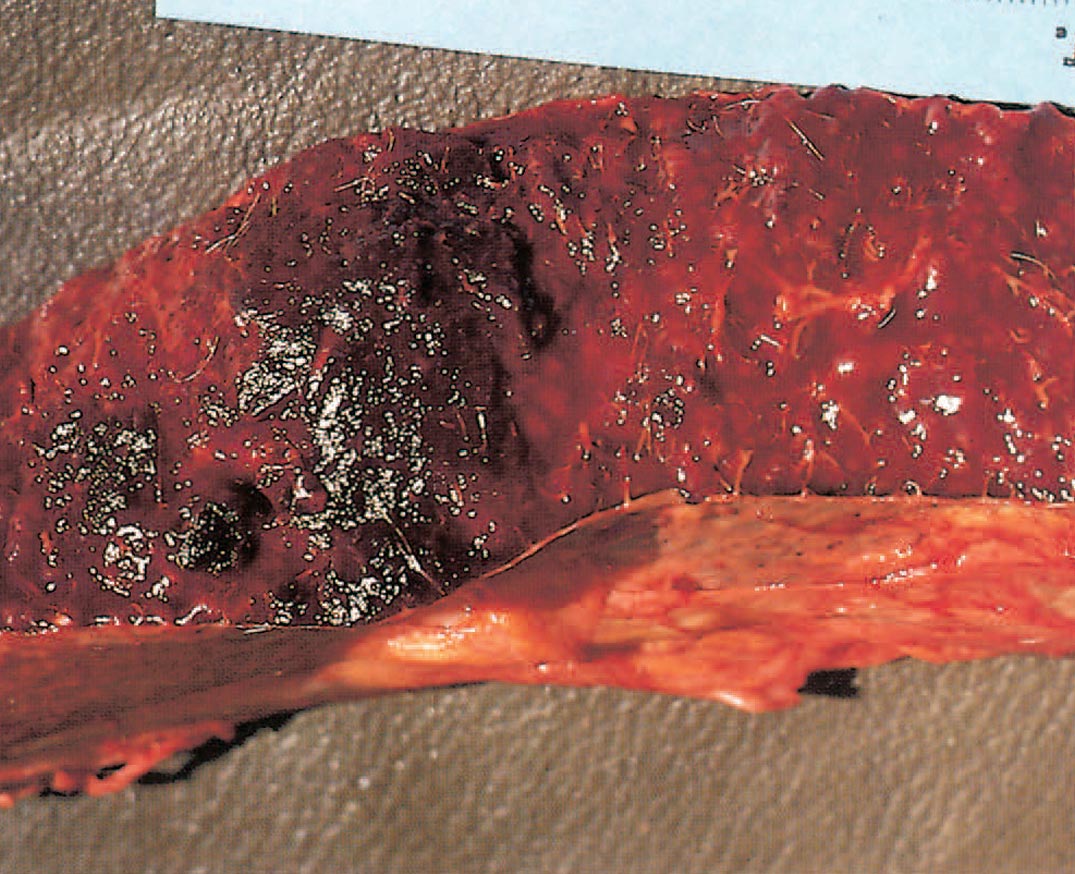 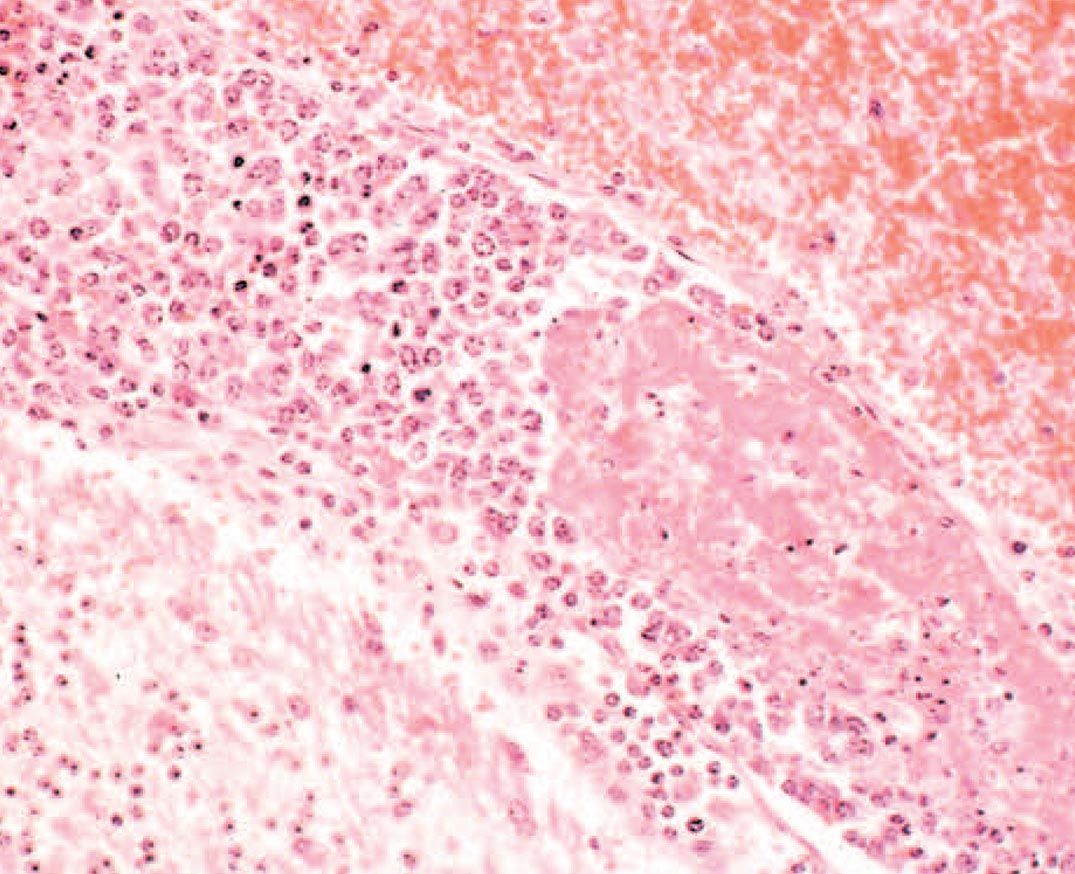 Figure 32.5 Thrombosis and sludging of parasitized lymphoblasts in an area of...