Culicoides biting midges are mosquito-like in their behaviour with the females of nearly all species being obligate blood-suckers (Figures 5.1 and 5.2) and being active only at night, especially when environmental conditions are calm and warm. The males feed on plant sap. Culicoides are 1 to 3 mm in size and are thus considerably smaller than mosquitoes but are more abundant and, on occasion, are found in enormous numbers in climates ranging from tropical to temperate. Most species possess grey- and white-patterned wings; these patterns being a very useful aid in their identification. To date 1 210 species of Culicoides have been described worldwide38 but it is certain that many more await discovery; for example, one third of the 112 species known to occur in South Africa are new to Science.216

Culicoides are well represented in the fossil record (39 species) with the lineage of the family Ceratopogonidae going back at least 130 million years.38 Midges clearly recognizable as Culicoides have been described from upper Cretaceous amber (88 to 93,5 million years ago), and it is therefore probable that Culicoides once fed on dinosaurs. A modern equivalent is the exclusive association between some Culicoides spp. and the African elephant (Loxodonta africana).223 At present 38 subgenera comprise the genus Culicoides but many more await delineation. This taxonomic diversity is testimony to a long and complex evolutionary history reflected in the fact that Culicoides today feed on a broad spectrum of hosts including reptiles, mammals, birds and humans. It has been shown that in southeast Asia some Culicoides spp. will even feed on bloodengorged mosquitoes. Their blood-thirsty attacks on humans in some parts of the world are legion, and have earned them scientific names such as damnosus, irritans, vexans and diabolicus. These attacks can be so intense as to retard development and production in industries such as forestry and tourism.155, 202 In Africa animals appear to be the hosts most intensively bitten. Under exceptional circumstances, such as prevail during overly wet periods, more than one million Culicoides can be captured in a single blacklight trap set at a horse stable on a warm summer night. Remarkably, such numbers probably represent only 1 per cent of the Culicoides population actively seeking blood, and illustrates the nightly levels of irritation, and possible risk of infection, that livestock may seasonally have to endure. 219

Certain species have a proven involvement in the transmission of at least two of the 15 OIE list ‘A’ diseases, namely bluetongue (BT) and African horse sickness (AHS). They also transmit epizootic haemorrhagic disease (EHD) of deer, and equine encephalosis (EE).116, 328 Thus, in sub-Saharan Africa, Culicoides are of great economic and veterinary significance. Indeed, it has been suggested that Culicoides midges were involved in two of the ten biblical plagues of ancient Egypt.210 This is not improbable, as the suppressant effect of Culicoides-transmitted disease must have manifested soon after the domestication of livestock some ten millennia ago. In support of this contention is that epidemics of devastating extent have occurred in the modern era, the most no table being when AHS swept through the Near and Middle East in 1959/60 causing an estimated 300 000 deaths.164 Another example is the AHS epidemic that decimated 70 000 equids in the then Cape of Good Hope Colony in southern Africa during the 1854/55 ‘season’.19 The unprecedented scale of the latter outbreak, which claimed 40 per cent of the colony’s total horse population in a mere eight months, attests not only to the efficiency of Culicoides as disseminators of infection but also to the modern-day necessity of protective annual vaccination. In eastern and southern Africa specifically this prophylactic regimen cannot be abandoned as it has long been known that there is a clear link between above average rainfall and outbreaks of Culicoides-borne orbiviral diseases.

The first studies on sub-Saharan Culicoides date back to 1908 when two species were described from Namibia122 but, whilst of a high standard, the subsequent continental research effort has been mostly short-term and fragmentary. The last decade, however, has brought significant advances especially in our basic understanding of Culicoides systematics, which includes the discovery that the most important Old World vector of BT and AHS, C. imicola, is but one member of a complex that comprises at least 10 species. 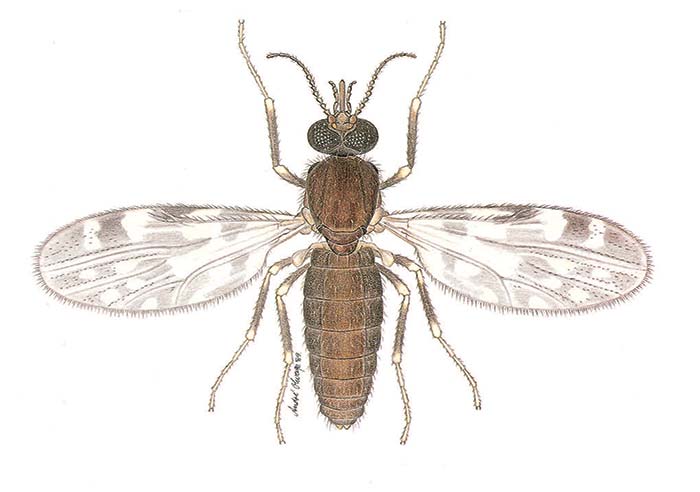 Not only does each species have a unique biology, but laboratory infection studies have shown that a recently described species within the complex, C. bolitinos, may in certain instances be a more efficient field vector of bluetongue virus (BTV) than C. imicola.

Further insights gained from field outbreaks strongly support the laboratory findings around C. bolitinos, and thus the ‘single-vector status quo’ that has stood since the time of du Toit’s seminal studies115 on C. imicola more than 50 years ago, is gradually being eroded. In addition, the longneglected study of the interaction between Culicoides and African game animals (which naturally cycle the abovementioned viruses) has finally received some attention, and yielded much...