In the Afrotropical Region (previously referred to as the Ethiopian or sub-Saharan Region) the family Muscidae embraces 870 species in 60 genera and six subfamilies.42 However, only three subfamilies, the Stomoxyinae, Fanniinae, and Muscinae contain genera of veterinary importance, these being Haematobia, Haematobosca, Stomoxys, Musca, Hydrotaea, Morellia, Muscina and Fannia. Species in these genera are important not only because they may cause irritation to livestock, resulting in production losses,46 but also because of their potential as mechanical vectors of various disease organisms, a fact that has been generally neglected in southern Africa. Greenberg13 listed a multitude of organisms that have been isolated directly from various synanthropic fly species and which have the potential to be transmitted mechanically under the right circumstances. He reviewed the studies made throughout the world on fly transmission of a wide variety of diseases, such as brucellosis, anaplasmosis and summer mastitis.14

The literature is saturated with articles on the control of these flies. In North America much effort has gone into the chemical control of the horn fly (Haematobia irritans irritans) and the face fly (Musca autumnalis), while in Australia a biological control programme to control the buffalo fly (Haematobia irritans exigua) and the bush fly (Musca vetustissima) by the introduction of exotic dung beetles was started in the early 1970s.3 However, the stable fly (Stomoxys calcitrans), the house fly (Musca domestica), the lesser house fly (Fannia canicularis) and the false stable fly (Muscina stabulans) continue to flourish in conditions created by humans, especially in intensive farming situations such as dairies, feedlots and chicken farms.23 The efforts and ingenuity of humans to produce more milk, meat and eggs do not always include efforts to avoid a greater fly problem!

Members of the Muscidae are not biological transmitters of infectious diseases. Although they have been shown to be capable of mechanically transmitting numerous diseaseproducing organisms, they are seldom controlled for this reason. A second reason for southern African farmers’ apparent apathy about these flies is that they are unaware that so many species exist, each with its own requirements for survival and its own potential for disease transmission. For example, at least 20 species of Musca are found on farms in various parts of South Africa, but are often confused with the house fly.31

The purpose of this account is to provide an insight into the life cycles, disease transmission potentials and control of the muscid flies in the subcontinent. Identification of families, sub-families, genera and certain species can be facilitated by reference to publications by Walker,51 Greenberg13 and Zumpt.55 These publications also provide information on biology and distribution. For a visual comparison of six common species of Muscidae, see Figures 3.1 to 3.6.

In southern Africa this subfamily is represented by eight genera, the three main livestock-associated genera being Haematobia, Haematobosca and Stomoxys.55 The adults of these flies do not feed on nectar, but are obligatory blood-suckers. They possess a mostly slender, rigid and chitinized proboscis that enables them to puncture the skin of animals to obtain a blood meal. The proboscis cannot be retracted, projects forward and can often be seen from above (Figures 3.1 and 3.3).

These are obligatory blood-sucking muscid flies that seldom leave the host except to lay eggs in recently deposited dung. Female Haematobia irritans irritans flies (Figure 3.3) have been found to average 38,4 feeds in 24 hours and males 24 feeds.16 This semi-permanently parasitic way of life ensures a food supply, and a larval habitat close at hand. It also leaves them very vulnerable to many insecticides applied to animals for the control of ticks. 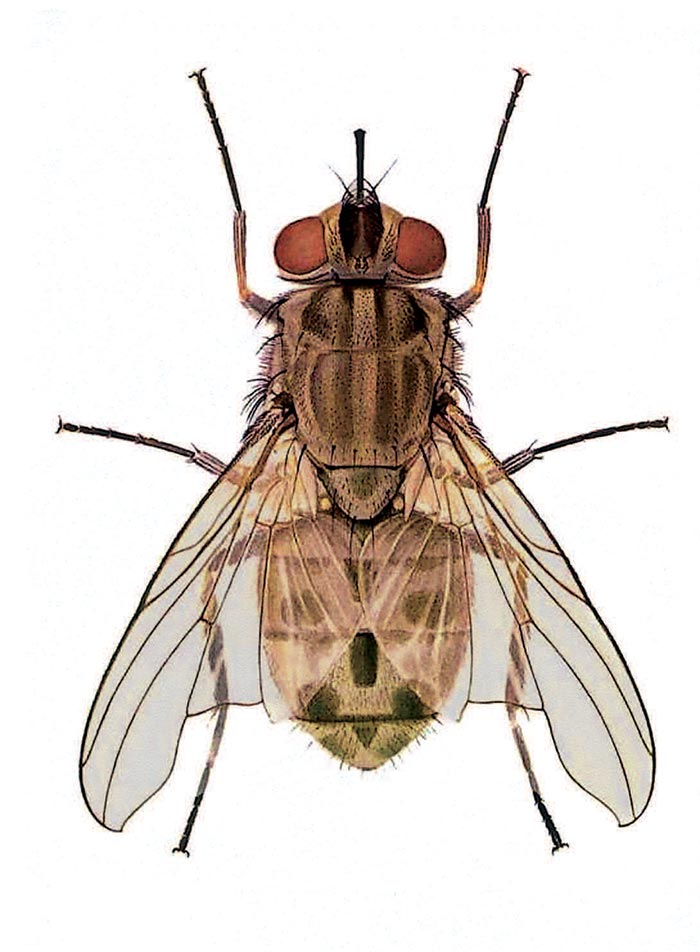 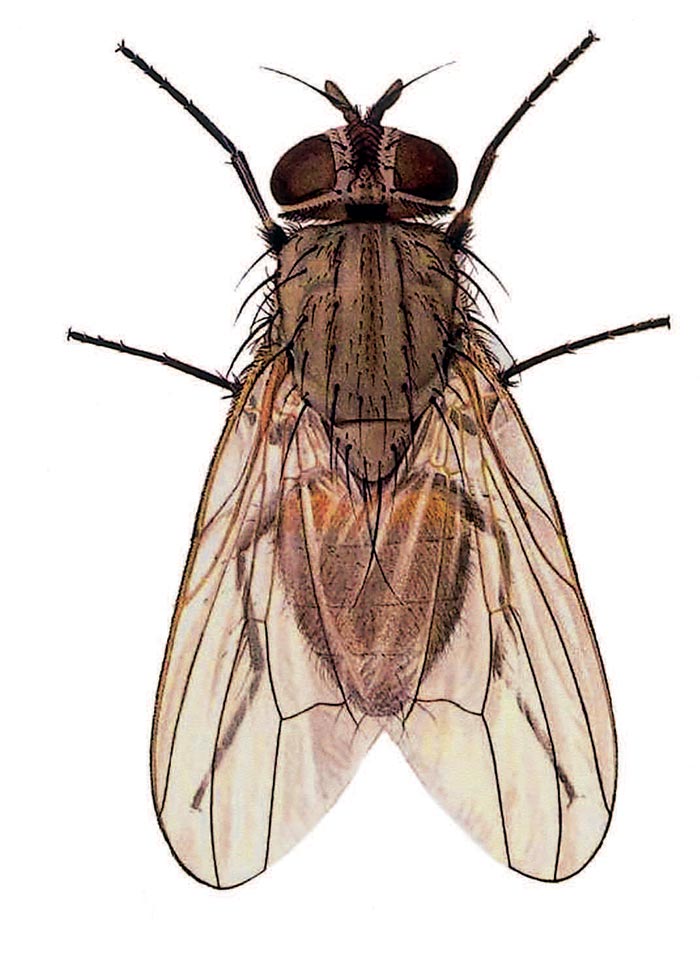 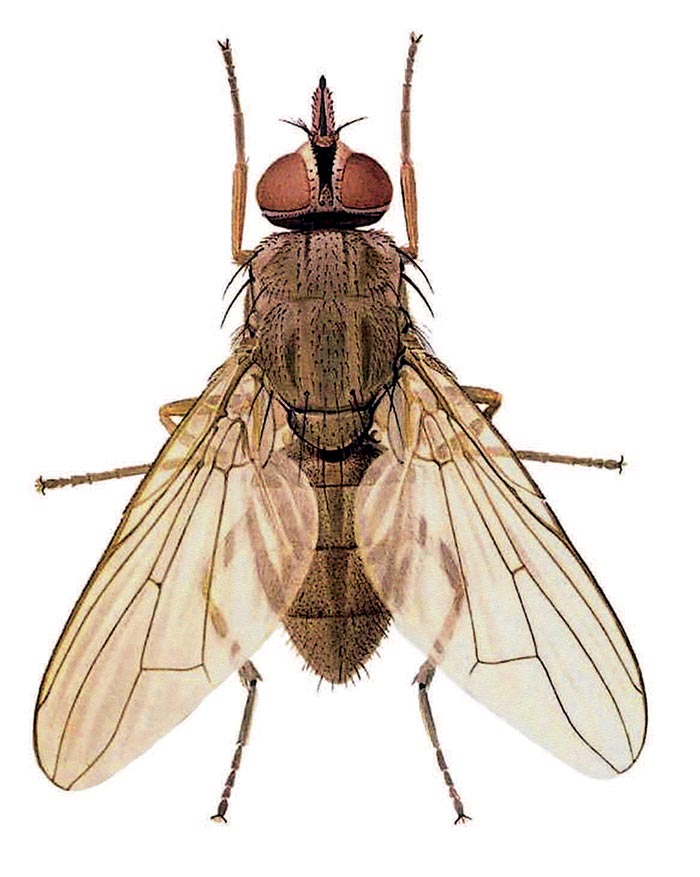 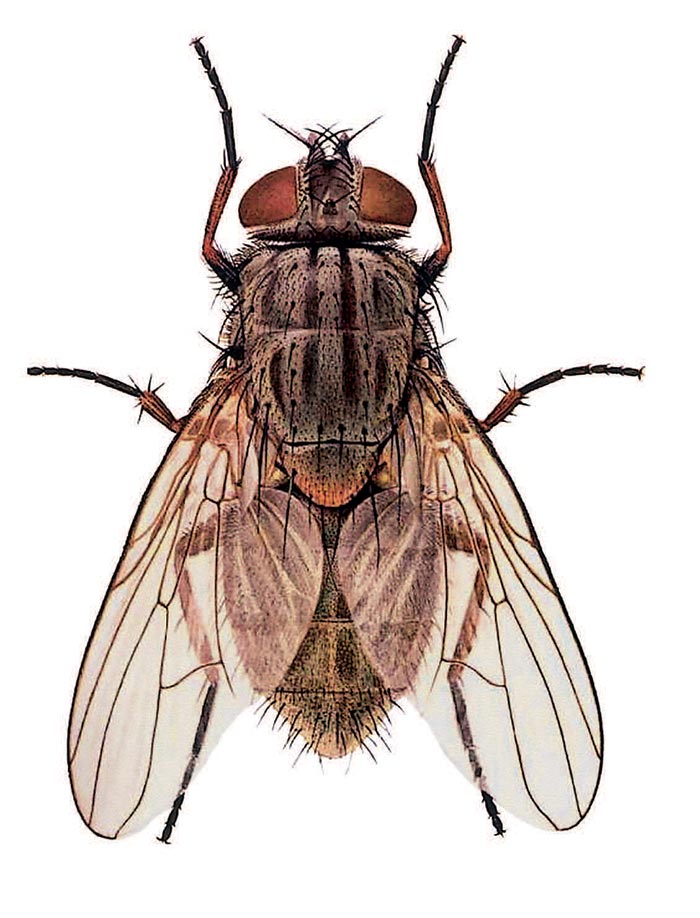 Three species of Haematobia have been recorded from southern Africa, namely H. thirouxi potans, H. meridiana and H. spinigera, all of which are primarily associated with game, especially African buffaloes (Syncerus caffer).55 In 1937/38 H. thirouxi potans was reported to be a problem on cattle along the coast from the Eastern Cape Province to southern KwaZulu-Natal.9, 55 The problem disappeared after synthetic organo-chlorine insecticides were used at the end of the Second World War.18 Today, horn flies have again become a pest on farms, either where non-insecticidal tickdetaching agents are used for tick control, or where no tick control is practised.

In southern Africa no Haematobia spp. have so far been proven to be vectors of any organism that causes disease in game or livestock. In many other parts of the world Haematobia spp. are biological vectors of...